This image has circulated online since at least 2013, and recently it's been doing the rounds again. Often it's given the caption, "Best Manhole Cover. Ever." 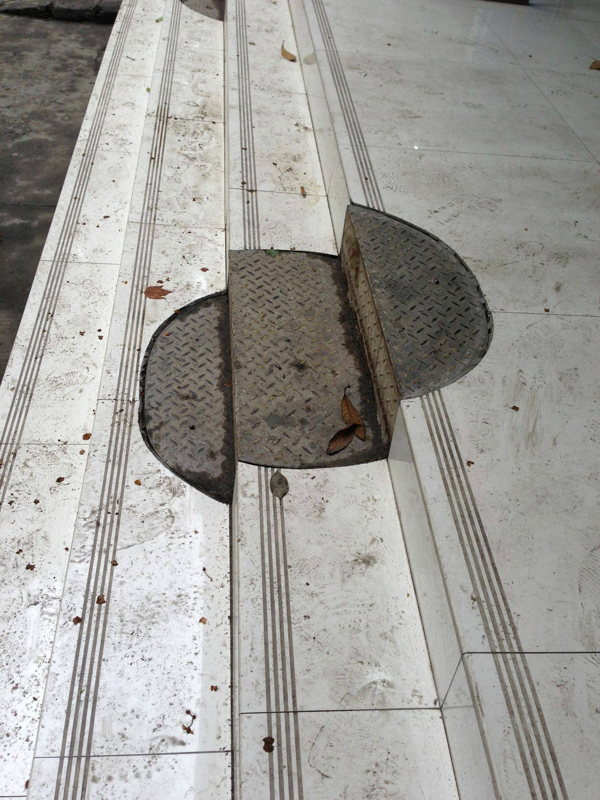 Is it real or photoshopped? Honestly, I'm not sure.

If it's photoshopped, it's extremely well done. You can find copies of it online at quite high-resolutions, allowing you to zoom in and see a lot of detail — which would be unusual if it was a fake.

Also, there are details in the photo that suggest to me that it's real. For instance, at the top of the image, you can see the edge of a second manhole cover on the stairs. That seems like an unlikely detail for a photo faker to add. So I'm guessing that this "manhole cover" really exists somewhere.

However, I doubt that it's an actual manhole cover concealing a hole. There's a reason that manhole covers are made round — so they can never fall in the hole. Swing the cover here around and it would fall right in.

More likely, it's just concrete beneath this cover. Perhaps this was created as some kind of art installation. Or perhaps there used to be pillars there that were removed, and this serves as a kind of creative patch, filling in the gap in the tile.

However, I can't find any information that might give a clue about the location of this unusual manhole cover. Nor any photos of it from a different view.

So for now I'll leave this image as 'undetermined'.

At the top of the image you can see what looks like a second "manhole", which would seem to support the "removed pillar" hypothesis.
Posted by John  on  Tue May 05, 2015  at  04:16 AM
"There's a reason that manhole covers are made round — so they can never fall in the hole."

This little piece of comedy does an excellent job answering the question properly: