I found this photo in the collections of the Minnesota Historical Society. It shows a Mr. O'Mahony (of Pipestone, Minnesota) proudly showing off a "mammoth hail stone" — size: 6" x 6" x 8" and weighing 5½ lbs. 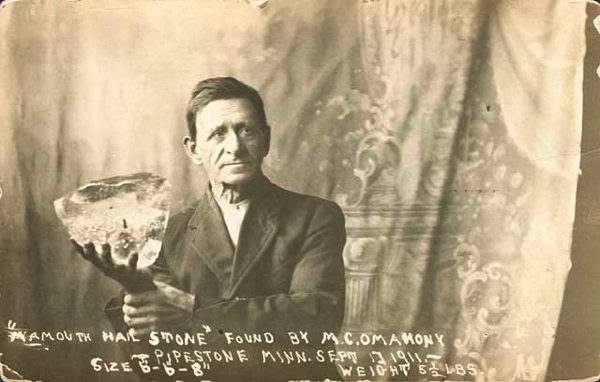 A note attached to the photo reveals that the hailstone was a fake:


Mr. O'Mahony was the victim of a hoax. This large chunk of clear icebox ice was dropped through a skylight in a public building where it was found and assumed was fell from the sky during as a huge hail stone.

The instigator of the creative prank confessed many years later - after he grew up and became a prominent citizen in Pipestone County. Hail ice is milky colored and not clear.
If this hailstone had been real, its dimensions would have made it the largest ever recorded. But according to NOAA, the record goes to a stone discovered in South Dakota after a storm on July 23, 2010, measuring 8 inches in diameter and weighing nearly 2 pounds.