Lions at large in the Hamptons 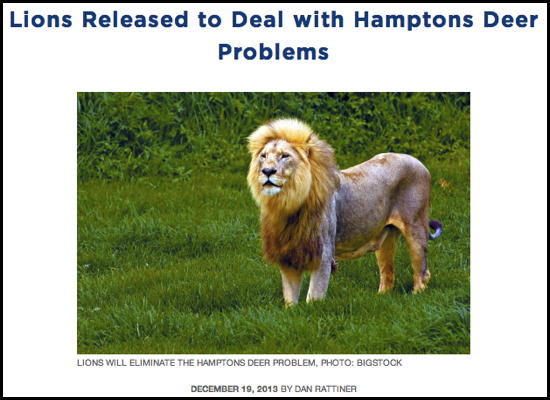 Dan's Papers, which serves the Hamptons in New York, recently reported that lions were going to be released in order to cull the growing deer population in the region. The lions would be supplied, free of charge, by a wealthy South African industrialist who had recently bought a home there.

The report disturbed some of the locals. According to southampton.patch.com: "[The police] fielded anywhere between 10 and 15 calls from residents voicing their anger at the 'news,' and at least one caller claimed to have seen a lion stalking her back yard."

The report was actually the latest effort from Dan Rattiner, the "hoaxer of the Hamptons" — the owner and founder of Dan's Papers. He's been salting his papers with fake stories since the 1960s. Way longer than all these johhny-come-lately fake-news sites online nowadays.

It's astounding that there are still Hamptonites who fall for these. I'm not even in the same country, and I've cottoned on by now that if something strange happens in the Hamptons, it's the same guy again. There must be a lot of inbreeding over there for them to still take these seriously.
Posted by Richard Bos  on  Tue Jan 07, 2014  at  09:12 AM
Clearly ridiculous.
Everyone knows it's the female lions that do the hunting.
Posted by sfbooklady  on  Thu Jan 16, 2014  at  01:14 PM
Commenting is not available in this channel entry.