In May 1921, a story ran in the British Daily News about an unusual advance in pig farming. A German farmer living in the town of Schleichegrieben had, the paper said, figured out a way to have his pigs but eat them too, by developing a method of obtaining lard and rashers from live pigs.

The technique was made possible by surgical innovation using novocaine (a local anesthetic), which at the time was still something of a novelty, having first been synthesized in 1905.

The farmer began the procedure by strapping a pig to a table. Then he had a veterinary surgeon inject novocaine into the parts of the pig from which the rashers were to be obtained. Once the pig was insensible to pain, incisions were made on its back and abdomen. A layer of fat was cut out, and then the skin was sewn back up.

After the operation, the pig was bandaged up, and four months later it was ready to be operated on again, yielding more lard. In this way, the farmer was able to obtain lard from each pig three times a year.

The British paper marveled at this "Prussian solution of food problem," noting that it had made true the "old pantomine jest about keeping a pig and having fresh home-grown rashers of bacon every morning."


The Story Spreads
Half a year later, the same story, distributed by a wire service, appeared in numerous American newspapers, now accompanied by an illustration showing the pig "ready for the knife" and "after the operation." 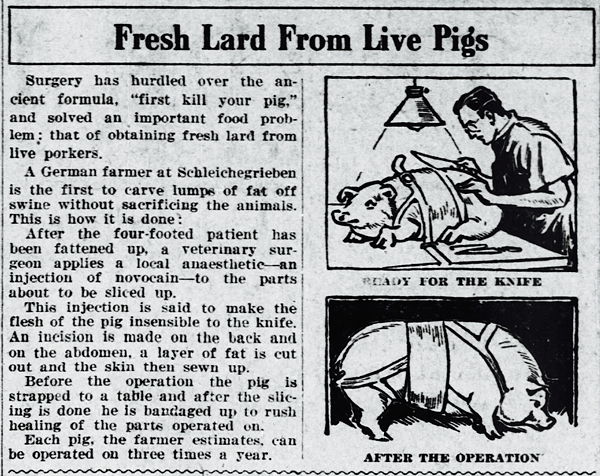 Magazines also picked up on the news, such as the Engineering and Mining Journal (Feb 25 1922), which noted that the technique seemed "essentially Teutonic" — highly efficient, yet slightly cruel. 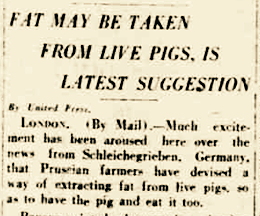 Then the story recrossed the Atlantic, and in early 1922 was reported again in many London papers. However, now more criticism of the scheme was voiced, as well as some skepticism:


Interviews with prominent English raisers of pigs revealed that this method had not yet been tried in England and probably would not, because of its roughness on the pig.

A skeptic has, however, given these revolutionary ideas a setback. He observed that the name of the German village mentioned means in English, "Sneaking fat."
Debunked
The skeptic was right to question the authenticity of the town of Schleichegrieben. It didn't exist and was a joke. The German verb "schleichen" means to approach with stealth, or sneak, and "Grieben" are rashers or crackling (the fatty skin of roast pork).

In fact, the entire story was a joke. The news of the strange Prussian method of obtaining lard from live pigs had first appeared in the April 1921 issue of the Berliner Illustrirte Zeitung, a German news magazine. It was an April Fool's Day spoof. The magazine had a tradition of running a few such stories every April 1st.

The British Daily News, not realizing the story was a joke, had reported it as real news a month later. And none of the other British and American publications that subsequently reprinted the story ever realized that they were falling for an April Fool's Day hoax. 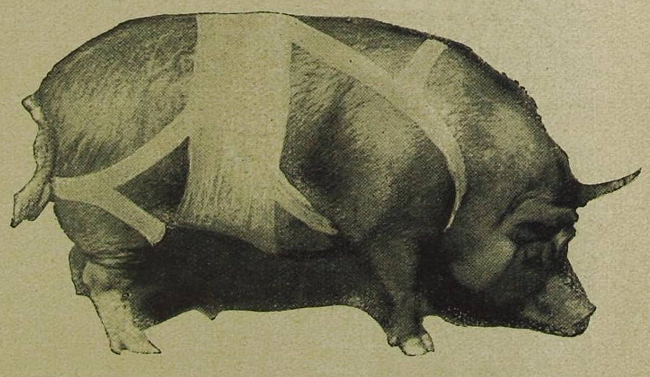 In the early 20th Century, German papers were far more enthusiastic about running spoof April Fool's Day stories than were their English-language counterparts, and there were a number of instances in which the American and British press was taken in by these German April Fool jokes. (By contrast, today it's the British media that's most associated with April Fool fakes.) The German papers frequently illustrated their spoofs with fake or misleading photos (such as in the 'lard from live pigs' story), which added to their verisimilitude.

The most notorious case of a German April Fool spoof fooling the American and British press occurred in 1934 when the Berliner Illustrirte Zeitung (again!) reported that a German pilot had invented a machine that allowed him to fly using his own lung power as a means of propulsion. This story was subsequently widely reprinted as fact throughout the world. Even The New York Times fell for it.

In fact, there is an old Russian joke about a peasant whose pig had prosthetic legs because he needed some jelly and did not want to kill the pig. I heard it in 1980s from my father who could have heard it as early as in 1960s. Its origin may be even pre-Soviet. However, nobody has taken it as anything other than joke.
Posted by Russian Skeptic  on  Mon Jan 12, 2015  at  05:43 AM
Commenting is not available in this channel entry.