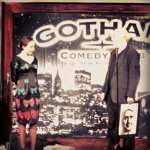 The surprise guest at this year's Andy Kaufman Awards, which took place in NYC over the long weekend, was Andy Kaufman's 24-year-old daughter. The surprise is that Kaufman died 29 years ago. And Andy didn't store his sperm, or anything like that, in order to facilitate post-mortem conception.

Andy's brother Michael explained that Andy faked his death because "Andy wanted to go into hiding and live a normal life, that he'd met and fallen in love with a woman and had a daughter, and that he didn't want Michael or anyone to say anything while their own father was still alive. Andy's and Michael's father died this summer. " [via The Comics Comic]