This Day in the History of Hoaxes: June 29 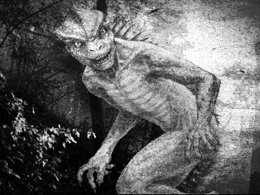 June 29, 1988: The first Lizard Man sighting
A 17-year-old driving home from work at 2 AM in Lee County, South Carolina reportedly encountered a green reptilian humanoid with glowing red eyes. Within a month, several other people had reported seeing a similar creature, leading to a wave of "Lizard Man" mania. Tourists came hoping to see the creature, and a radio station offered a $1 million reward for his capture. Lizard Man remains at large. [wikipedia]