This Day in the History of Hoaxes: June 28 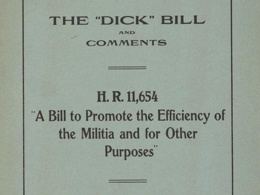 June 28, 1902: Passage of the Dick Act
According to an email that has circulated widely since 2012, the "Dick Act" (passed on June 28, 1902) permanently made all gun-control laws unconstitutional. Furthermore, the Dick Act "cannot be repealed." This email is a hoax. The truth is that there was a Dick Act, which created the National Guard system, but it had no bearing on gun-control laws. And like any law, it could be repealed (and was, in fact, extensively rewritten by subsequent acts of Congress). [armsandthelaw.com]