This Day in the History of Hoaxes: June 21 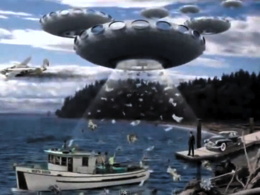 June 21, 1947: The Maury Island Incident
On this day, Harold Dahl claimed to see six "donut-shaped" discs flying above him while he was on a boat in Puget Sound. One of the discs ejected bits of molten metal, which (so Dahl said) killed his dog and burnt the arm of his son. Dahl also said that he was later visited by a man in a dark suit who warned him not to talk further about the incident. This was the first report of a "man in black". Air Force investigators identified the metal as scrap metal from a factory, and Dahl confessed that his report was a hoax. [wikipedia, mauryislandincident.com]