This Day in the History of Hoaxes: June 19 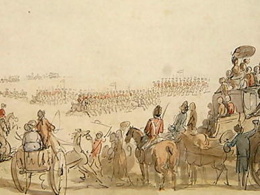 June 19, 1816: Wimbledon Common Military Review
Twenty-thousand people assembled on Wimbledon Common in England to witness a 'Grand Military Review' that pamphlets had promised would occur. When it became clear that no parade was happening, the crowd grew restless and set fire to the grass. They weren't appeased when officials explained that no parade had ever been planned, and that the pamphlets were the work of a prankster. The crowd continued to grow ever more violent, so much so that the police were unable to contain them. Eventually a detachment of guards was dispatched from London with orders to parade up and down the Common, in order to satisfy the crowd.