This Day in the History of Hoaxes: June 18 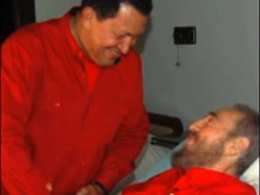 June 18, 2003: A Phone Call to Fidel Castro
On this day in 2003, two Miami DJs fooled Cuban President Fidel Castro into thinking he was receiving a phone call from Venezuelan President Hugo Chavez. The DJs simulated Chavez's voice by playing back real soundbites spoken by the Venezuelan leader during speeches, while a presenter posing as a Chavez "aide" carried the bulk of the conversation. The "aide" explained that Chavez needed help finding a lost suitcase. Castro readily agreed to help, at which point the "aide" revealed to Castro that he "fell" for it, and that "All of Miami is listening to you." This prompted Castro to break out in a string of invective. [youtube]