This Day in the History of Hoaxes: June 17 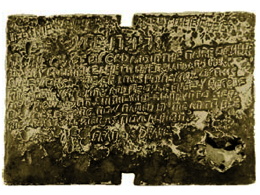 June 17, 1579 is the date engraved on a brass plate, commemorating the landing of Francis Drake in San Francisco Bay. The plate was found in 1936 and was initially believed to be the actual plate left centuries ago by Drake and his crew. It was only determined to be a forgery in the late 1970s. Members of a historical society, E Clampus Vitus, had created it as a practical joke on one of their own members, but the joke spun out of their control. [berkeley.edu]