This Day in the History of Hoaxes: June 15 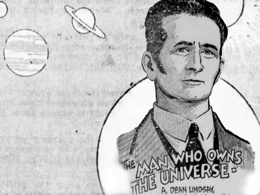 On this day in 1936, Arthur Dean Lindsay had a deed of claim notarized declaring his ownership of "all of the property known as planets, islands-of-space or other matter." He subsequently filed this deed at the Irwin County Courthouse in Ocilla, Georgia, where it was recorded in the Deed Book. After bringing his ownership rights to the attention of reporters, Lindsay became widely known as the "man who owns the universe." Although skeptics questioned what gave Irwin County the right to give deeds to the heavenly bodies.