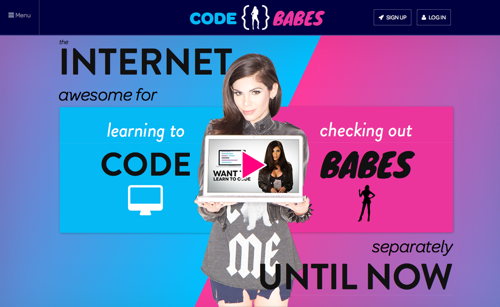 CodeBabes is a new site that promises to make the process of learning how to write code more fun by using "hot babes" as the instructors in video tutorials. Every time the student advances a level, the "babe" removes an item of clothing. The website explains:


"We've developed a revolutionary learning programme that leverages sexual desire and turns it into the most powerful learning mechanism ever known to mankind. Babes and code. You watch the lesson. Absorb the info. Pass the quiz, and your instructor removes one piece of clothing. How much clothing, you ask? Enough to motivate you. But let's not get carried away here. We're an education site." 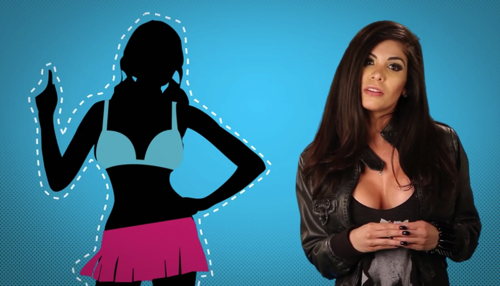 The premise of the site has many people wondering whether the entire thing is an elaborate hoax. For instance, Rebecca Greenfield, writing for fastcompany.com, ponders whether it's a "huge troll" that "blows Silicon Valley's sexism problem out into one website of cleavage-laden horrors." She goes on to express hope that it's "some sort of social commentary on how Silicon Valley culture alienates women at all levels."


I don't know what the intentions of CodeBabe's creators really are, but my gut sense is that this is neither a hoax nor a troll. After all, the site really does have "babes" in video tutorials. So it seems to me they've progressed past the point of parody. They're already delivering on their promise.

One good test of whether or not a site is a hoax is whether it's willing to take your money. Hoax or parody sites will usually stop short of taking people's money, because a financial transaction carries real legal weight.

I wasn't willing to go through CodeBabe's sign-up process, because I didn't want to get on their mailing list. However, their Terms of Use page contains language indicating that they're definitely willing to take people's money. Which is a strong sign that the site is not intended as parody.

I can't say if it's a hoax or not, but it certainly bears an uncanny resemblance to a program referenced in Piers Anthony's Xone of Contention, the 23rd Xanth novel, published in 1999. In that one, the tutorial program is teaching specifically to a spreadsheet program, but has the sexy female tutor remove clothing for each level of complexity learned. It's described in chapter one, but isn't a major plot device.
Posted by Yvonne  on  Sat Apr 26, 2014  at  01:54 PM
I wonder what straight female prospective coders are supposed to do - learn the traditional way?
Posted by Cliodna  in  Estonia  on  Sat Apr 26, 2014  at  04:41 PM
DE-evolution.., gaining momentum..., Surgically "enhanced", & pseudo-sacrosanct.., (yawwn..).
Posted by Rhodia  on  Sun Apr 27, 2014  at  04:24 PM
Hoax, troll... maybe. But one thing is certain: they won't get anything better than script kiddies with this program. Real hackers have better things to do than gawk at silicone. (They prefer silicon instead.)
Posted by Richard Bos  on  Tue Apr 29, 2014  at  06:30 AM
Why wouldn't this be real?

Selling erotica to computer geeks in their teens and twenties, how can you not make money off of that?
Posted by Christiaan  on  Mon May 05, 2014  at  04:56 AM
Commenting is not available in this channel entry.