On March 3 a video appeared online (with an accompanying website) announcing that a company had created an actual working hoverboard (aka HUVr Board), of the kind seen in the 1989 movie Back to the Future II, using antigravity technology. The video immediately went viral, with over 3 million views already on YouTube.


As many have noted, the video is clearly fake. No one has created a working hoverboard. But it was an impressive fake. Especially noteworthy is the number of celebrities appearing in the video — including Christopher Lloyd, Moby, Tony Hawk, Terrel Owens, etc. 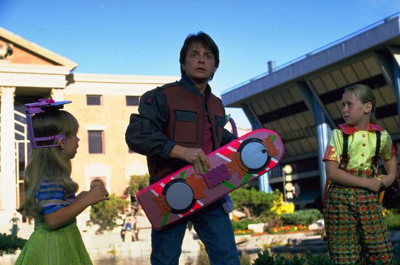 Which raises the question: why did someone go to the considerable expense of creating this video? What's the purpose of it?

A leading theory is that it may be a teaser for an upcoming Back to the Future sequel.

But apparently the comedy site Funny or Die was involved in the video's production, as discovered by sleuths who found that an LA wardrobe stylist mentioned in her online resume having worked on the video for that site.

So maybe the video is just a viral comedy bit for Funny or Die.