How to make cotton cakes

Back in the 19th century, food pranks were very popular on April Fool's Day. And one of the most popular forms of trick food was the "cotton cake." Instructions for how to make this delicacy were reported by Jane Eddington in the Chicago Daily Tribune on Apr 1, 1929: 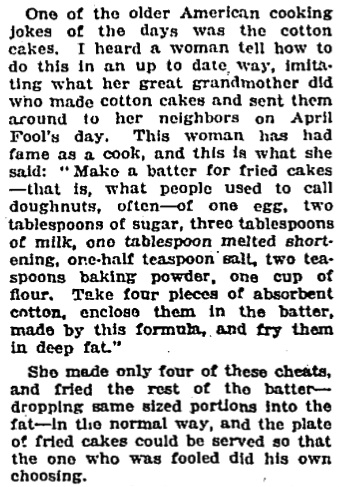 One of the older American cooking jokes of the days was the cotton cakes. I heard a woman tell how to do this in an up to date way, imitating what her great grandmother did who made cotton cakes and sent them around to her neighbors on April Fool's day. This woman has had fame as a cook, and this is what she said:

"Make a batter for fried cakes — that is, what people used to call doughnuts, often — of one egg, two tablespoons of sugar, three tablespoons of milk, one tablespoon melted shortening, one-half teaspoon salt, two teaspoons baking powder, one cup of flour. Take four pieces of absorbent cotton, enclose them in the batter, made by this formula, and fry them in deep fat."

She made only four of these cheats, and fried the rest of the batter — dropping same sized portions into the fat — in the normal way, and the plate of fried cakes could be served so that the one who was fooled did his own choosing.