How To Make A Psychic Omelette

E.J. Gold describes himself as a "psychic cook". Or, at least, he briefly kept a blog on which he described himself in this way and offered various psychic recipes. 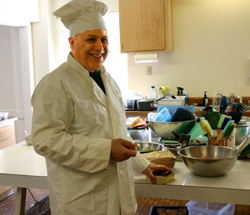 His recipe for a psychic omelette starts off in a pretty standard way, but once the eggs have begun to harden in the frying pan, the psychic part kicks in:


8. It's at this point that you begin chanting "OM MANI PADME HUM" until the omelette has cooked to your satisfaction on the topside. Then with a deft scoop of the spatula, send the omelette into the air slightly, just enough to flip it over, and get the pan under it to catch the turned-over omelette just right. This takes a bit of practice. The omelette will always have the same look to it at the exact right turning point...you need to observe it with your full attention to determine when that will be. There's a bubbling effect just before the turn point. Think like an alchemist to get this right.

9. When the omelette is firm, but not overcooked, and definitely NOT browned, it's time to turn it over again for a moment or two, add your internal ingredients such as cheese, yogurt, green peppers or whatever, then fold the omelette in half, slip it onto a prepared plate with all your other items already on it, add pepper or topping to taste, and serve. Now you can stop chanting "OM MANI PADME HUM". You have fulfilled your Way of Service for the moment. And that's how a psychic makes a great omelette.
I'm not totally sure whether he was being serious when he posted this blog (Poe's Law), but given the info in his wikipedia bio, I'm leaning toward the conclusion that he was.

Maybe I'll give this psychic cooking a try one of these days and see if it makes any difference.