On Wednesday, Nate St. Pierre posted an interesting story on his blog. He detailed his discovery of an attempt by Abraham Lincoln in 1845 to create and patent a social-networking system that very much resembled Facebook. Only it was an all-paper version of Facebook, and Lincoln didn't call it Facebook. In his patent application he supposedly called it "The Gazette," and he described it as a system to "keep People aware of Others in the Town."


He laid out a plan where every town would have its own Gazette, named after the town itself. He listed the Springfield Gazette as his Visual Appendix, an example of the system he was talking about. Lincoln was proposing that each town build a centrally located collection of documents where "every Man may have his own page, where he might discuss his Family, his Work, and his Various Endeavors."
Lincoln created a sample Gazette page (below) for himself, to show the patent office what he was talking about. St. Pierre commented how much it resembled a Facebook status page because it included a picture of Lincoln in the top left, and then had columns in which Lincoln discussed various details of his life. For instance, in one column Lincoln described his great enjoyment at visiting P.T. Barnum's circus. 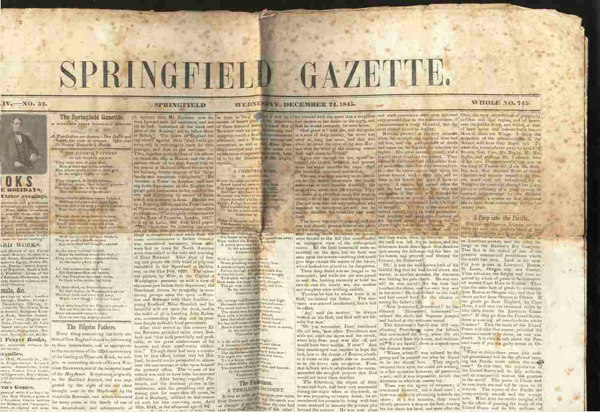 And this is where St. Pierre's story falls apart, historically speaking. Because Barnum didn't own a circus in 1845. (He had his New York museum, at which he was perpetrating hoaxes such as the Feejee Mermaid exhibition.) Nor did the technology exist in 1845 to include a photograph on a newspaper page. Daguerre had only announced his invention of photography in 1839, and there was no way to make multiple copies of daguerrotypes, short of taking a photograph of the photograph, which meant the quality degraded with each reproduction.

The reality is that no part of St. Pierre's story is true. Lincoln never submitted a patent for a 19th-century version of Facebook. The story is pure historical fantasy. Though that hasn't stopped over 16,000 people from sharing the story on Facebook. (And one suspects a good percentage of those people might have thought the story was true.)

For those interested in real history, the nineteenth century did produce some social-networking innovations that definitely were the distant predecessors of Facebook. The penny press, introduced in 1835 1832, was the most important of these. As the name implies, the penny press was simply the idea of selling newspapers at the cut-rate price of a penny each. This made papers cheap enough to become a mass-market commodity, hugely increasing their readership. Like Facebook, the penny papers were full of local gossip and news. They pioneered the concept of "personal ads" placed by individuals. They relied heavily on advertising for their income. And the owners of the most successful penny papers became filthy rich. I go into quite a bit of detail about the penny papers in my article on the Great Moon Hoax of 1835.

Super. It's extra-entertaining when a joke combining several interests of mine is created & shared. I was gonna say that that image is rather low-resolution but appears to be an engraving rather than a photo but, having visited the blog, now I will not. 'Nice to see that April Fools Day hasn't ended yet.
Posted by hoaxinghal  on  Sat May 12, 2012  at  01:23 PM
Commenting is not available in this channel entry.