Does having a hairy chest prevent cirrhosis of the liver? 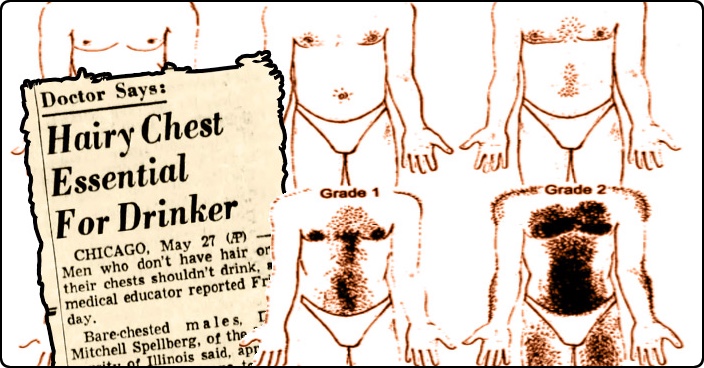 The other day, I was reading The Book of Strange Facts & Useless Information (1979) by Scot Morris, when I came across the following statement: "Men with hair on their chests are less likely to get cirrhosis of the liver than bare-chested men are."

This is definitely a strange fact, and therefore appropriate for Morris's book. But could this possibly be true? Why would chest hair have anything to do with a cirrhotic liver?

Morris didn't provide any references, and the veracity of many of his "strange facts" seems questionable. So I wasn't willing to just take his word for it. Also, it sounded like it might be some kind of medical urban legend. But I was curious. So I decided to find out what the truth was.


The Source of the Strange Fact
Tracking down the source of this strange fact wasn't particularly difficult. Throughout the 1960s and early '70s a handful of newspaper articles drew attention to the curious link between chest hair and cirrhosis.

The primary source of information for these articles was one Dr. Mitchell Spellberg, a liver specialist at the University of Illinois and author of Diseases of the Liver (1954). In May 1961 Spellberg held a press conference, in conjunction with the 62nd annual meeting of the American Gastroenterological association in Chicago, in order to put out a warning that men without hair on their chests should be careful about the amount of alcohol they consume because they're at greater risk to develop cirrhosis of the liver when compared to men with hairy chests.

Said Spellberg, "I always tell my medical students that when they go into practice and ever have a patient without hair on his chest, for heaven's sake, don't let him drink."

He noted that just because a man had hair on his chest didn't mean he could drink excessive amounts of alcohol. However, he then declared that, "the bushy chested individual is probably endowed with more protection against alcohol than his bare chested brother."

Spellberg's warning was picked up by the Associated Press and ran in many newspapers.

Spellberg wasn't the only doctor to note the chest-hair/cirrhosis link. The connection was also referred to in Bedside Medicine (1960), the memoir of Dr. Isidore Snapper:


When many decades ago we warned the 'Diener' of the Department of Pathology in Vienna about the dangers of his alcoholic libations — after all, he even drank the alcohol in which the specimens had been fixed — he opened his shirt, beat his hairy chest and assured us in Viennese vernacular that hairy individuals never develop cirrhosis.
However, Snapper then added a note of skepticism: "Such an absolute pronouncement should probably be taken with a few grains of salt; nevertheless, it should not be disregarded completely."


Cause or Effect?
So by the 1960s, some doctors evidently believed there was a connection between the amount of chest hair a man had and his likelihood of developing a cirrhotic liver. But I wondered whether they were confusing an effect of cirrhosis with a risk factor — i.e. perhaps cirrhosis causes men to lose their chest hair, and this had led doctors to believe that a hairless chest made men more likely to develop cirrhosis?

Perhaps. However, a medical source from the mid-1970s, Mortal Lessons: Notes on the Art of Surgery (1976) by the Yale surgeon Dr. Richard Selzer, made clear that doctors regarded a hairless chest as a premorbid risk factor for cirrhosis — that is, a risk factor that preceded any onset of disease, not one caused by the disease:


Another measure of susceptibility [for cirrhosis] is, brace yourselves, the absence of hair on the chest. In males, of course. Unpelted men of the sort idealized by bathing-suit and underwear manufacturers are sitting ducks for the onset of cirrhosis. All other things being equal, women, the marrying kind, would do well to turn aside from such vast expanses of naked chest skin and to cultivate a taste for the simian. It was formerly thought that cirrhotic men lost their chest hair. Not so. They never had any to begin with.
Selzer further noted that cirrhosis is not, by any means, an easily understood condition. Many people drink in excess, but only a few of these develop cirrhotic livers. Factors other than alcohol seem to be involved. For instance, very few Jewish people develop cirrhotic livers. Selzer writes, "It has been reported by more than one visiting professor of medicine that noticeable segments of the population of Israel get and stay drunk for quite heroic periods of time. It is also reported that their livers remain enviably healthy."


The Clinical Evidence
Where were these doctors getting their information from? Was their belief based on anecdotal reports? Or had researchers actually examined the chest-hair/cirrhosis link?

It took a little more digging, but I discovered that, yes, there have been a few studies of the chest-hair/cirrhosis link. These studies were all conducted subsequent to Spellberg's 1961 press conference (so he must have come to his conclusion based on anecdotal evidence). Furthermore, they didn't all arrive at the same conclusion.

The earliest study that I found, conducted by a group of doctors from St. Vincent's Hospital in New York City, was published in 1962 in the American Journal of Digestive Diseases.

The doctors described the purpose of their study as being to examine the "well-established clinical axiom... that hairy-chested males do not have severe cirrhosis of the liver."

Comparison of hirsuteness in three groups

The last group of random, white men all happened to be doctors "observed at poolside at a recent scientific meeting." Evidently the authors of the study had found an ingenious way to combine conference fraternization with medical study.

They determined that there was no significant statistical difference in chest-hair growth between the three groups. This led them to conclude, bluntly, that, "Hairyness of the chest is of no aid in bedside diagnosis of cirrhosis of the liver."

So much, it seemed, for the chest-hair/cirrhosis link. However, this wasn't the last word on the issue. In 1979, newspapers reported on an Austrian medical study that found "that men with hairy chests are less likely to get cirrhosis of the liver." I haven't been able to find the study itself, only the news reports about it.

And more recently, a study published in 1998 in the journal Digestive Diseases and Sciences offers what seems to be the most rigorous examination of the issue — and flatly contradicted the 1962 study (though they didn't cite the earlier study and presumably weren't aware of it).

They found that even though the scanty hair growth group actually consumed, on average, slightly less alcohol, tests showed that their livers suffered more severe damage. The researchers therefore concluded that there was "a highly significant association between the extent of hair growth over the trunk and the development of alcohol-related liver disease."

They further suggested that chest hair (or the lack of it) provides "an easily recognizable clinical sign identifying individuals at increased risk of developing alcohol-related liver damage."

And why would chest hair be related to cirrhosis of the liver? The authors suggested that the sex-hormone testosterone is the reason, because it influences both the ability of the liver to metabolize alcohol and the growth of chest hair.


The possibility arises that patients with low androgen expression at the receptor level not only have reduced truncal hair growth but also have lower hepatic MEOS content, which results in delayed ethanol elimination. In this context it should be noted that women, who have lower androgen receptor expression, develop alcohol-related liver disease more readily than men.
Conclusion
It's taken a while to get here, but the answer to the initial question (Does having a hairy chest prevent cirrhosis of the liver?) would, surprisingly enough, appear to be a tentative yes, based on the most recent scientific data.

Of course, it's not the chest hair itself that prevents cirrhosis, but rather a higher level of testosterone.

It also needs to be emphasized that this doesn't mean that men with hairy chests can feel free to drink as much as they want. Excess alcohol consumption can cause plenty of other bad effects.

Plus, a disclaimer: I have no particular medical expertise. So don't treat any of the above as medical gospel.

However, I should give Morris credit. His strange fact turned out to be true. Or, at least, current medical evidence suggests that it's true.

Some casual browsing found an interesting article which argued that alcoholics tend also be malnourished.

I also ran across this interesting paper: http://onlinelibrary.wiley.com/doi/10.1111/jgh.12695/full
Posted by Joe  on  Thu Jun 02, 2016  at  01:05 PM
With regard to the New Delhi study: if you split a group of men into two, it's very unlikely that the two groups will have exactly the same number of cases; one subgroup will have more cases of cirrhosis than the other. And for the numbers cited here, "highly significant" will mean <5% which almost certainly means about two cases difference. If they did the same thing again they would be just as likely to get two cases the other way. This is a classic example of scientists making claims based on the sort of data that makes mathematicians laugh.
Posted by James Smith  on  Wed Jun 08, 2016  at  09:10 PM
Hih - well, it is nice to know and in fact really meaningful article...i am a student of pharmacy and i am just learning about this stuff, liver etc. There are a lot of toxins that are way more dangerous than just alcohol; yes in a longer run it could be a problem for lonely individual and his liver.
But if you live normal life I believe it should not be the problem. Alcohol can destroy you for sure - but when your intake of alcohol is normal it should not be any problems.

Our professor said, that when you are young there is just enough to live a normal life and take care of yourself, don.t party to much and if you do, just detoxify your liver with Silybum marianum extract - picture from google:

Well but i have to tell that a friend of mine that passed away - he was really heavy drinker and you know it is kind of true - alcohol can kill you in an instant (he was not hairy though). He went mountain hiking and he just collapsed, it was obviously too much for him.

Stay healthy and do not drink it too much

Posted by Tomy  on  Thu Jun 16, 2016  at  02:18 PM
While I does not believe there is a direct relation between chest hairs and alcoholism...
There is a story that Europeans tends to have a higher tolerance to ethanol than other people. And that Europeans tends to be more hairy than other people. Therefore... I guess that being hairy and tolerant to alcohol tends to be found in the same populations. Genes proximity I guess.
Posted by Youpi  on  Tue Jul 19, 2016  at  03:14 PM
An interesting post. I did an article (Pass the liver salts) on the topic a couple of months ago, although characteristically I couldn't help but inject my perverse sense of humour. You can check it out here.
http://flaxensaxon.blogspot.co.nz/2016/05/pass-liver-salts.html
Posted by Flaxen Saxon  on  Fri Aug 12, 2016  at  04:56 PM
Commenting is not available in this channel entry.