The Ancient Sport of Haggis Hurling

According to legend, the sport of haggis hurling originated in the seventeenth century when the women of Auchnaclory tossed meals of haggis across the River Dromach for their husbands, who would catch it in their kilts. However, the sport eventually lapsed into obscurity. 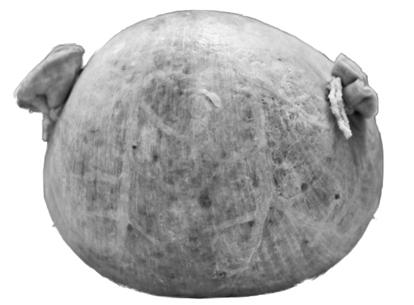 A well-formed haggis. [Source: Euan (Flickr)}
But in 1977, at the International Gathering of the Clans in Edinburgh, haggis hurling was brought back as a featured event.

The sport was given formalized rules. Competitors had to rub peat on their hands and hurl the haggis while standing on top of a half-barrel of Scotch whisky. 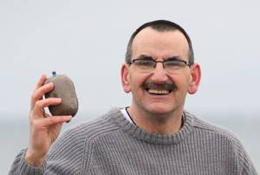 A World Haggis Hurling Association was founded, which sent certificates to the best hurlers, announcing their inclusion in the Fellowship of the Order of the Crumbs. National haggis hurling organizations appeared in the US, Canada, New Zealand, and Australia. And the Guinness Book of World Records began documenting the longest hurls. The first world record holder was Alan Pettigrew, who hurled a haggis 180' 10" in 1984. 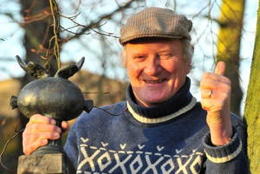 Robin Dunseath [Lincolnshire Echo]
But on January 25, 2004, haggis hurlers throughout the world were stunned to learn that their sport wasn't ancient at all. It was just a modern invention. A hoax.

The news was broken by Scotland's Sunday Herald which reported that the sport had been invented in 1977 by, of all things, an Irishman, Robin Dunseath, in order to "gauge the gullibility of the Scots."

Dunseath had served for 20 years as President of the World Haggis Hurling Association, but he told the paper that he had finally decided to come clean and reveal the sport's faux origins because he was worried that the sport was becoming too commercial and ridiculous.

Dunseath, who had been working as a publicist for Scottish entrepreneur Tom Farmer back in 1977, offered this explanation of how the sport actually originated:


"It was all just a joke. Myself and a few friends got together because we were annoyed at people exploiting Scotland for their personal advantage, selling all of this rubbish - tartan knickers and tartan pencils - to tourists.

"I took out an advert in a national paper advertising the world haggis hurling championships at the Gathering of the Clans and we were amazed by the response. Hundreds of people turned up and they took the sport back to the United States, Canada and Australia and started hurling haggis under the impression they were reviving an ancient Scots sport."
Reaction
Newspaper reports about haggis hurling from the late 1970s and early 1980s had often referred to the sport as a joke. Nevertheless, when the Sunday Herald interviewed haggis hurlers around the world, they professed to be shocked that the sport wasn't actually an ancient tradition.

Jim Nethery, Chief Hagrarian of the Association for Scottish Haggis Hurling (United States Branch), said: "Oh boy. He just made that up? I've never actually looked it up."

Alan Pettigrew, the Guinness world record holder, had an angrier response: "[Dunseath] said he invented the history? That's rubbish. He may have helped revive the sport, but he didn't make it up. The history is real."


The Games Continue
Dunseath's revelation briefly threw a wrench into the sport of haggis hurling. The 2004 World Haggis Hurling Championships in Glasgow had to be cancelled following the withdrawal of commercial support due to the adverse publicity.

But eventually the dust settled. New sponsors were found, and everyone decided that they didn't really care whether haggis hurling was an ancient tradition or a modern joke. The games had to continue.

As Dunseath noted in a 2013 interview: "It made no difference and happy people continued to hurl the Scottish delicacy as far away from themselves as they could, hoping to be nominated for membership of the Order of the Haggis."

A new official World Record for Haggis Hurling was set by Lorne Coltart at the Milngavie Highland Games on 11 June 2011, when he hurled a haggis 217 feet.

Hey! This is cruelty to animals! Why doesn't the RSPCA do something?
Posted by Richard Bos  on  Tue Jan 07, 2014  at  09:09 AM
Commenting is not available in this channel entry.