The Fake Beggar of Gothenburg

Over in Gothenburg, Sweden, locals were puzzled by a homeless person begging for money at the train station, who, upon closer inspection, turned out to be a doll. Police thought it might be some kind of fraud (i.e. a homeless people using a mannequin to beg for him). But it turned out to be the work of a 13-year-old kid, Adam, who created it as "something fun" for a school art project. Brings to mind Alan Abel's Omar the Beggar hoax.

The english-language article didn't have a picture of Adam and his "fake beggar," but I found one at a swedish-language site. 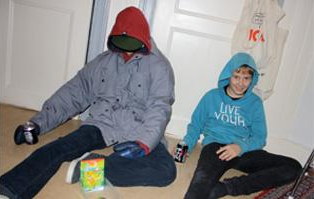 Gothenburg teen behind 'homeless beggar' hoax
thelocal.se
Adam told GT that he made the life-size doll out of cardboard and second-hand clothing. He then placed the doll at the city's train station, before carrying it over to a park near the central thoroughfare Avenyn. The mysterious "fake beggar" went on to garner national media attention after national news agency TT wrote about the doll, quoting a police spokesman who theorized it could be a case of fraud. The doll, which even had a beer can in its hand, even attracted the attention of several passersby.
"I was standing a short distance away and filming how people reacted, that's part of the project," he told GT, explaining that the entire installation is part of a school art assignment. In the end, a passer-by had placed seven kronor ($1.10) next to the mock-up, a sum that Adam eventually chose to gave to a real life person asking for money on the street.