The Case of the Girl Whose Mother Fed Her Tapeworm Eggs 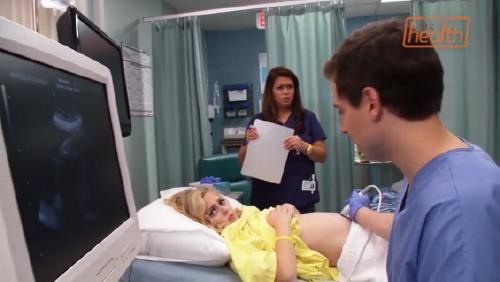 Recently the TV show Untold Stories of the E.R. (which airs on Discovery's 'Fit & Health' channel) presented a dramatized version of a case in which a girl came in with a swollen stomach and complaining of agonising stomach pains. Doctors were only able to figure out what was wrong with her after she went to the bathroom and excreted tapeworms. At which point, her mother admitted that she had given her daughter a pill containing tapeworm eggs in order to help her daughter lose weight before a beauty pageant.

After the show aired, this story was widely re-reported, but some sites are now claiming the story is an urban legend being presented as news. Specifically, Cracked.com says:


this story came from a clearly fake anecdote in a 'reality' TV show... Turns out that the tapeworm diet is such a common urban myth that Snopes has a page devoted to it, making the proper headline for this: 'Person in Reality Show Tells Story That's Most Likely an Urban Legend, but We're Going to Report It Anyway Because We Have No Standards Oh God Someone Please Stop Us!'
I wouldn't be so quick to dismiss the story as an urban legend reported as news. It is true that the case reported in the show is anecdotal. Their source is a nurse, Maricar Cabral-Osorio, who said she witnessed what happened. Nevertheless, it seems plausible to me that this could have happened.

I'll explain more about why I think this is so in just a bit. But first, let's look at what Snopes had to say. Their article begins by reporting about the Untold Stories of the E.R. case. They don't say the story is "clearly fake" as Cracked does. Instead, they say it "echoed a century-old rumor about women buying and ingesting diet pills made of tapeworm eggs in order to maintain slender figures."

Snopes goes on to note that one can find early 20th-century ads for tapeworm-based diet pills. However, it's not clear if these pills actually contained tapeworm eggs. Or if people were being sold placebos. 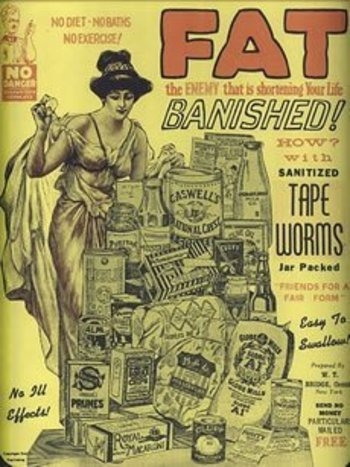 Also, there are persistent (false) rumors alleging that various famous women such as Claudia Schiffer and Maria Callas have taken tapeworm pills to lose weight. The rumors focus on Maria Callas, in particular. It's actually probably true that Callas experienced a tapeworm infection. But it's doubtful that she purposefully ingested the tapeworm eggs.

1) There's an old urban legend that alleges you can lose weight by eating tapeworm eggs.
2) There are false rumors alleging that various famous women have done the "tapeworm diet."

Okay. But can we assume that it's a myth that ANYONE has ever eaten tapeworm eggs to lose weight? Of course not.

First of all, people often act out urban legends. This is a well-known phenomenon called ostension. The popularity of the tapeworm diet legend increases the probability that people will actually try it.

Second, there are numerous reports about clinics down in Mexico (and other parts of the world with lax medical regulations) willing to supply eager dieters with tapeworm eggs. For instance, on June 1, 2008, the Daily Star reported about one Charmaine Brown who paid £500 in order to be infected with a tapeworm parasite at a Mexican clinic.


CHUBBY Charmaine Brown was so desperate to lose weight she swallowed a tapeworm. The 26-year-old says she had tried every diet going to shed some of her 11st 2lb. Now she claims to have lost three stone after paying GBP 500 to be infected with the parasite at a clinic in Mexico.
"It sounds so disgusting but it did work, " she said.
"I was in despair about my weight and it was the last resort but I'm glad I did it.
"I did end up on the loo a bit more than usual but it was certainly worth it for me."
After being infected Charmaine, from Bath, lost half a stone in two weeks - and a total of three stone in 12 weeks, ending up a trim size eight.
Then, after reaching her target of eight stone, she took an anti-parasitic tablet provided by the clinic to kill the tapeworm.
A 2008 show on "E" managed to dig up a guy who confessed he had done the tapeworm diet:


And this has been posted about several times in the Hoax Forum.

Maybe I just have too pessimistic a view of human nature. But I find it completely plausible that there are plenty of people dumb enough to eat tapeworm eggs in a misguided attempt to lose weight — or to surreptitiously feed the tapeworm eggs to their daughter.

On a side note, in Electrified Sheep I wrote about the long (and very strange) history of scientific self-experimentation with tapeworm eggs. Numerous scientists have used their own bodies as incubators to grow tapeworms. In fact, for many decades it was a kind of bizarre rite of passage among helminthologists (i.e. researchers who study parasitic worms) to swallow tapeworm eggs and let them develop inside their own body. One of my favorite cases was that of Dr. Emmett Price at the National Zoo in D.C., who, back in 1928, swallowed some eggs he found in the liver of a dead giraffe, just because he was curious to find out what kind of worm they would develop into.

Given the eagerness with which scientists have downed tapeworm eggs, I'm inclined to believe that some members of the general public have probably done likewise.

However, it's worth underscoring that it's FALSE that a tapeworm will help you lose weight. The tapeworm will consume many of the micronutrients that your body needs, but it's not going to magically vanish anything you put in your stomach. If you eat a tapeworm, you'll probably feel sluggish and fatigued. But you're not going to lose much weight.

And the real title of the feature should've been: "Discovery show turns out to be complete and cynical fabrication; film at eleven".
Posted by Richard Bos  on  Tue Sep 09, 2014  at  01:15 PM
Commenting is not available in this channel entry.