For Sale: The Minnesota Iceman

In an obscure corner of the site, I have a brief blurb about a hoax from the 1960s — the Minnesota Iceman. It was "a strange creature frozen in ice... exhibited at carnivals throughout the Midwest. It appeared to be some kind of neanderthal man."

My blurb ends by noting, "Its current whereabouts are not known." But this is no longer true! A few days ago it popped up for sale on eBay. The seller wanted $20,000 for it. And apparently the seller got that much, because it's already sold.

I have no idea who bought it, but if they were willing to pay that much, they must have felt pretty sure that it was the original Minnesota Iceman. (via Doubtful News) 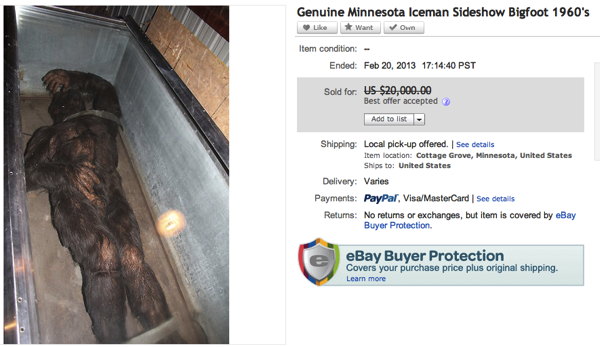 Looking at the eBay feedback, it seems like the buyers were these folks - http://www.luckylizard.net/
Posted by Joe Littrell  on  Fri Feb 22, 2013  at  07:40 AM
Commenting is not available in this channel entry.