The image shows a crowd sitting in bleachers calmly watching a football game, apparently unconcerned as a building burns to the ground behind them. The bizarre juxtaposition has led some people over the years to suspect that this image is fake — perhaps a result of darkroom photo manipulation. But in fact, the image is entirely real and was unstaged. 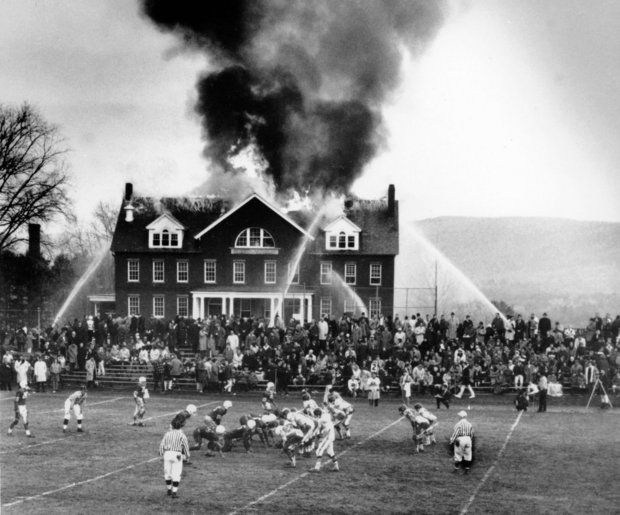 The scene took place on November 20, 1965 at Mount Hermon prep school in Massachusetts. The school's football team was playing Deerfield Academy. It was the last game of the season, and a large crowd had turned out to see it.

Just before halftime, people noticed smoke coming from Silliman Hall, the science building adjoining the field. The game immediately stopped and firefighters arrived to battle the blaze. But with such a large crowd milling around, the firefighters worried about people getting in the way of their efforts to fight the fire. So the crowd was told to stay in the bleachers, out of the way, and the decision was made to continue the game.

Robert Van Fleet, chief of the Ottaway News Service, happened to be there and recognized a great photo opportunity. He waited for the middle of a play when the crowd's attention was focused on the field, and then snapped a photo. The result was the strange combination of burning inferno and people watching sports entertainment.

The sensational photo ran in numerous papers and magazines, along with jokes about "heated competition." A caption accompanying the photo noted that the spectators were "apparently unconcerned" about the blaze, but of course, this wasn't true. The spectators were simply trying to stay out of the way, as they had been told to do.

Also, the perspective in the photo was somewhat misleading. The burning building was about 100 yards back from the field. Not directly beside it, as it appears in the photo.

It was later determined that the fire was caused by faulty electrical wiring. As for the game, Mount Hermon lost that (as well as their science building) 20-14, ending a two-year winning streak.

The story of this photo is told in more detail by Sarah Lyall in the New York Times (May 5, 2015) — "Fire Raged, They Played On, and the Photo Still Beguiles."