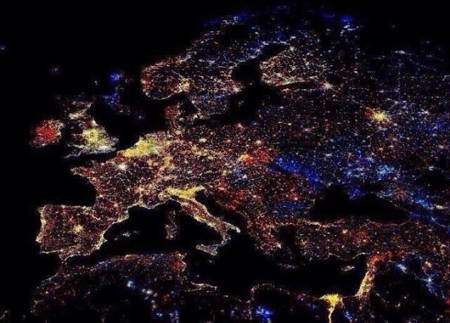 As 2013 ended and 2014 began, this photo started circulating online, along with the claim that it showed a satellite's view of the fireworks over Europe at the stroke of midnight on New Year's Eve.

But no, that's not what this photo shows. For a start, Europe isn't all in the same time zone, so the fireworks didn't go off all at the same moment. Second, fireworks wouldn't have created such intense illumination.

The image was actually created by the National Oceanic and Atmospheric Administration (NOAA) and shows changes in illumination from 1993-2003. Sciencephoto.com offers this explanation:


Lights are colour-coded. Red lights appeared during that period. Orange and yellow areas are regions of high and low intensity lighting respectively that increased in brightness over the ten years. Grey areas are unchanged. Pale blue and dark blue areas are of low and high intensity lighting that decreased in brightness. Very dark blue areas were present in 1993 and had disappeared by 2003. Much of western and central Europe has brightened considerably. Some North Sea gas fields closed in the period.
This image also circulated back in January 2013, following New Year's Eve, with the same claim. Look for it to reappear a year from now.
[via Astronomy Blog]