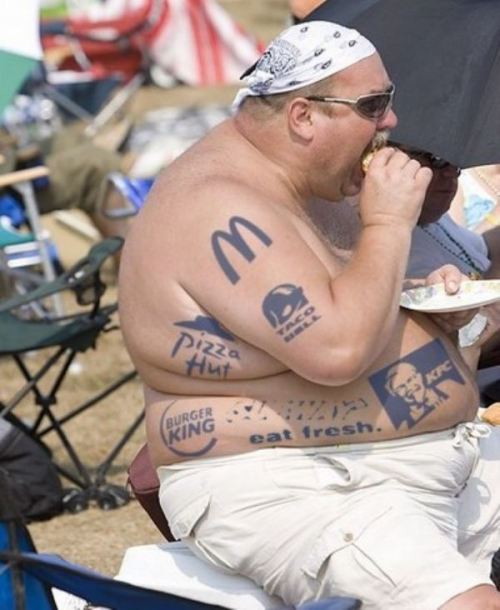 The "Fast-Food Tattoo Guy" image has been floating around the internet since 2009, at least. It's not a very good fake. Which is to say, it doesn't appear that many people have been led to believe, on the basis of this photo, that some large, cheeseburger-loving man actually decided to tattoo himself with the logos of fast-food restaurants.

Nevertheless, I'm always curious about where these fake photos originally come from. In the case of this photo, I tracked down the original to a series of photos taken by photographer Philip Greenspun at the Newport Jazz Festival in 2005. He took several shots of this guy sitting on the beach, eating his food, and listening to the music. He titled them, "fat shirtless guy eating cheeseburger."

Greenspun seems to have an ongoing interest in taking pictures of overweight Americans eating. For instance, he has a series called Fat People Eating in Epcot. And here he describes why he's interested in photographing fat people eating:


Most of it is that I think that better diet pills will be developed some time within the next 100 years.... The photos will then become a curiosity for people in the year 2100.
I don't know who added the tattoos to Greenspun's Newport Jazz Fest picture. 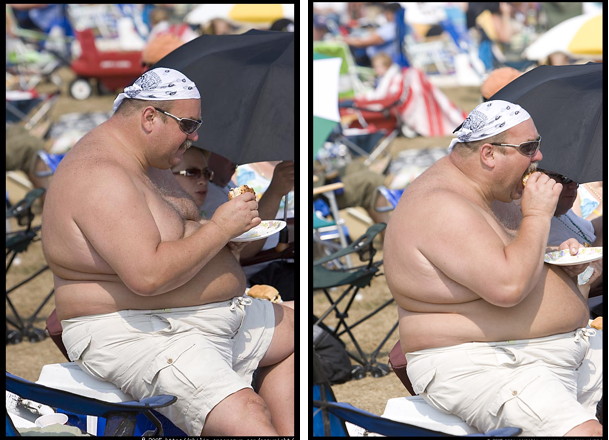