If you've got a spare $285,000, you can buy a piece of a famous art hoax: one of the fake Modigliani sculptures found in the city of Livorno in 1984. It's up for sale on eBay. I've noticed it up there for a couple of weeks, so evidently people aren't rushing to bid on it, even though it comes with free shipping. 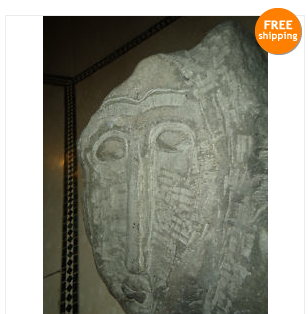 The backstory, briefly: There was a legend in the Italian town of Livorno that when Modigliani left there in 1906, at the age of twenty-one, he dumped a bunch of sculptures in a canal in a fit of depression. So in 1984, on the 100th anniversary of his birth, the town decided to dredge the canal to see if any Modigliani sculptures were still down there. To their surprise, they found three sculpted heads, in Modigliani's style. But their excitement was shortlived, because a few weeks later the heads were revealed to be a hoax. Two separate groups were responsible. Three university students had made one of the heads, and a dockworker, Angelo Froglia, had made the other two. Fuller versions of the story here and here.

The head now on sale is one of the two made by Froglia. The eBay seller says it was bought from Froglia's companion after death. The other two Modigliani heads are owned by the City of Livorno.

This auction confirms my long-felt belief that to really have a Museum of Hoaxes, stocked with genuine artifacts from the history of hoaxing, would require a boatload of cash.