I recently received an "Uncommon Goods" catalog in the mail and noticed an item they call the "Imagination Paperweight." It displays an inspiring Albert Einstein quotation: "Logic will get you from A to B. Imagination will take you everywhere." 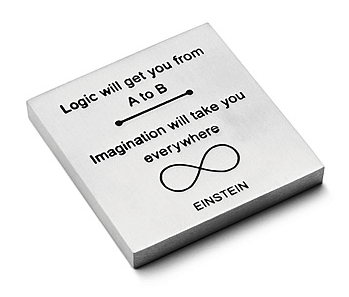 Knowing how many fake Einstein quotations there are floating around, my suspicion was aroused. So I checked and sure enough, this Einstein quotation has been called into question by the few people who have bothered to investigate it (as opposed to mindlessly parroting it).

The Skeptica Esoterica blog notes that it's listed in The Ultimate Quotable Einstein (2010) by Alice Calaprice, but it's in the "Probably Not By Einstein" section.

The quotation appears to have become very popular in the last 10 years. But I can't find any earlier references to it. Nor do any of the people who repeat the quotation mention where or when Einstein said it. So I'll conclude that it must be fake.

However, Einstein did say something very similar. According to quoteinvestigator.com, in an interview published in The Saturday Evening Post in 1929 Einstein was asked, "Then you trust more to your imagination than to your knowledge?" And he responded:

I am rather fond of the Tick's take on the idea:

"Sanity is a one-trick pony. I mean all you get is one trick: rational thinking! But when you're good and crazy, the sky is the limit!"
Posted by Robin Bobcat  in  Californian Wierdo  on  Sat Nov 16, 2013  at  01:15 AM
Thank you for the clarification on Einstein's quote. I like the one from the Post even better than the possible original.
Posted by Ted  on  Wed Jun 08, 2016  at  03:16 PM
Commenting is not available in this channel entry.