Evidence of Extraterrestrials in North Korea?

The Alien Disclosure Group (ADG) UK has posted a video on youtube in which they suggest that the funeral of North Korean leader Kim Jong-Il may have been attended by extraterrestrials. Or very tall earthlings. One or the other.

The ADG seems eager to see aliens in any mystery. But their video does highlight two legitimate items of strangeness from Kim Jong-Il's funeral.

The first is that there apparently really was an extremely tall person standing in the crowd watching Kim Jong-Il's funeral procession. His identity is unknown. So perhaps it was an extraterrestrial. Or maybe it was Ri Myung Hung, the 7' 9" North Korean basketball player. 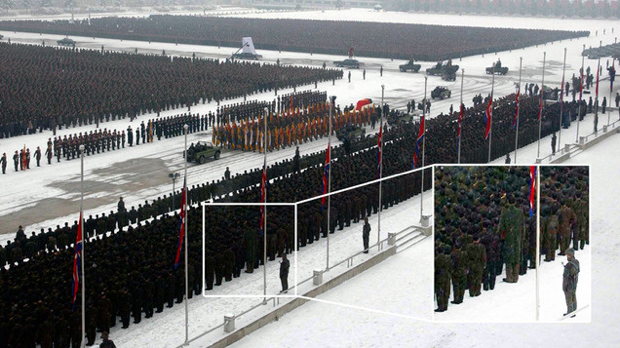 The second item of strangeness is that North Korea released a photo of the funeral procession from which, it was later noticed, a group of people had been erased. Why did the North Korean authorities erase these people? The ADG suggests it was because they were aliens. The NY Times suggests it was the work of some unknown North Korean photo editor who simply thought the photo looked better without those people. The Times attributes this to "totalitarian aesthetics":


With the men straggling around the sidelines, a certain martial perfection is lost. Without the men, the tight black bands of the crowd on either side look railroad straight. 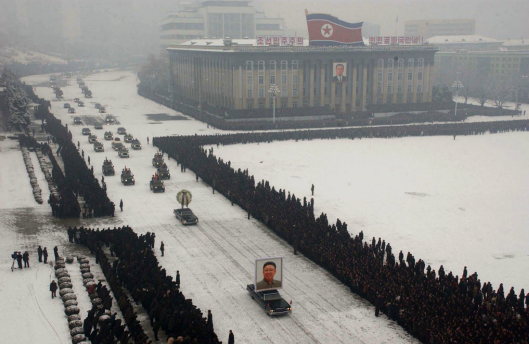 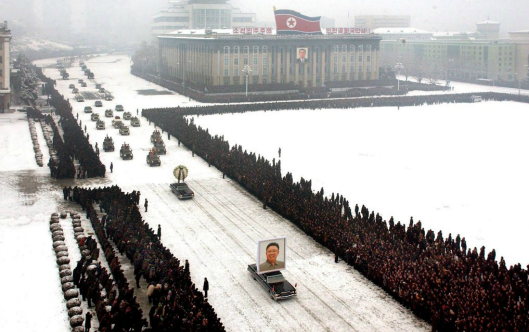 I will note that North Koreans tend, on average, to be very short people. This is due to both genetics (folks in that region tend to be short) and poor nutrition (they're noticably shorter than South Koreans, who presumably have a near-identical genetic mix). As a result, anyone who *is* tall is going to literally stand out in a crowd.
Posted by Robin Bobcat  in  Californian Wierdo  on  Wed Jan 04, 2012  at  11:58 PM
I'm with Robin in thought. My sister's parents were from North Korea. She stands a grand 4'6". Her husband and daughter appear to be 7' or more tall beside her in photographs as do I at 5'.
Posted by hulitoons  in  Abingdon, Maryland  on  Thu Jan 05, 2012  at  02:51 AM
hulitoons, wouldn't "[your] sister's parents" be your parents by definition?
Posted by Carl Fink  on  Thu Jan 05, 2012  at  03:31 AM
Depends on what you mean by 'definition'. Legally my sister and I have the same parents; biologically we do not. I am Scottish, she is North Korean. So we are different in genetics BUT the same in temperament!!! NEVER mess with either of us!
Posted by hulitoons  in  Abingdon, Maryland  on  Thu Jan 05, 2012  at  04:48 AM
Here is a photo of my siblings and me at a family reunion. My little sister and I are at the right side by my brother. It's blurry but you can see well enough I think: