Serge Benhayon is the creator of "Esoteric Breast Massage" (EBM). He describes this as a healing technique that offers many benefits, such as possibly preventing cancer. 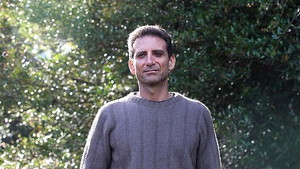 Serge Benhayon
Despite what you may be thinking, EBM is not just an excuse for him to massage lots of women's breasts. Far from it. In fact, he never does the massaging. He emphasizes that only women can perform EBM on other women. This made it a little awkward for him to teach the technique, back when he was the only person who knew how to do it. From an interview in Spa Australasia magazine (pdf):


I have never performed an EBM on a client nor to any of our practitioners. It is not for men to do. And hence, initially, and deliberately by design, a small group of women were selected to learn the EBM. In keeping with my teachings on Energetic Integrity, the technique was demonstrated on my partner under simulation and no naked bodies were used. Once the techniques were learnt, the group of women set-out to practice on each other, over and over, until they could feel and learn its entire structure and how the energetic science feels in action and in delivery.

EBM Brochure
Being the inventor of Esoteric Breast Massage isn't the only thing that makes Benhayon an interesting character. Turns out he's also the reincarnation of Leonardo da Vinci. And his daughter is following in his footsteps. She's the reincarnation of Winston Churchill, and a practitioner of "esoteric connective tissue therapy" as well as "craniosacral massage." Plus, she can talk to women's ovaries.

Benhayon and daughter operate from their Universal Medicine center, outside Lismore in New South Wales, Australia. But they're attracting controversy. Their treatments, though lacking much scientific backing, are partially funded by Medicare. And a group of men are complaining that Benhayon has ruined their marriages. Links: hillsnews.com.au, ulladullatimes.com.au.

So this is a hoax?
Posted by InsaniD  on  Mon Jul 23, 2012  at  10:28 AM
If not hoax, then atleast a piece of interesting news. I've got to keep an eye out so my mother doesn't learn about his practices. If she combines them with her own beliefs on ''energy manipulation'' and ''healing'' things are going to get...awkward...in this household.

So, what is he complaining about? That women get breast cancer because of gender roles and because they have to rely on male energy too much? What about places like all-female prisons? Or what about lesbian couples? Where his theory true shouldn't they get way less cases of breast cancer?

Even if it's not a hoax it has all the signs of becoming one...as soon as he starts to ask money for various energy supplements and massage training. Oh well.
Posted by Cliodna  in  Estonia  on  Tue Jul 24, 2012  at  03:29 AM
For the truth without the media spin please see

http://medicineandsergebenhayon.com/2012/07/24/the-truth-about-esoteric-breast-massage/
Posted by paula fletcher  on  Tue Jul 24, 2012  at  12:02 PM
Commenting is not available in this channel entry.