Elephants—Larger Than The Moon, and other Who Wants To Be A Millionaire Hoaxes

As Chris Tarrant departs from the UK version of Who Wants To Be A Millionaire, The Express takes the opportunity to review the history of the quiz show, including some of the hoaxes and frauds associated with it.

For example, the show spawned an internet meme of screenshots of contestants getting absurdly simple questions wrong. Many of these are hoaxes, such as the most famous one which seems to show contestant Fiona Wheeler (not Kathy Evans as some email captions claim) deciding that an elephant is larger than the moon. 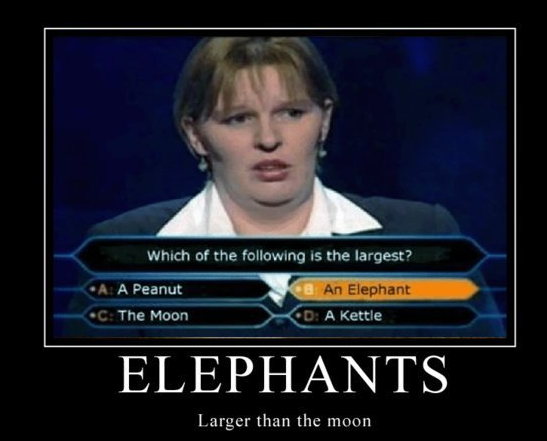 In reality, Wheeler was asked "What is the everyday name for the trachea?" (Breastbone, Windpipe, Kneecap, or Heelbone). And she got the answer right, going on to win £32,000. A screenshot of her answering this question was posted on ukgameshows.com, and someone altered it to create the elephant version. 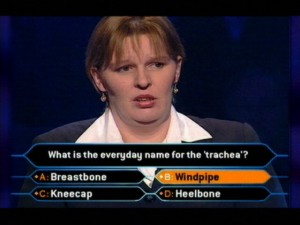 But sometimes contestants really have gotten absurdly easy questions wrong. Such as the French contestant who asked the audience for help on figuring out which celestial body orbited the earth: the sun, moon, Mars or Venus. The audience chose "sun," so that's what he answered. Laughter from the audience suggests some of them may have been pranking him.


Who Wants To Be A Millionaire also has a history of allegations of cheating and game rigging. For instance, £1million prize winner Charles Ingram was convicted of cheating by having an accomplice cough whenever the correct answer was read.

And many accused the producers of the show of feeding contestant Judith Keppel easy questions, so that they could have a big winner (and thus big ratings), thereby overshadowing the final episode of the BBC sitcom One Foot In The Grave.