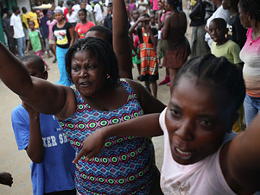 Ebola rumors and conspiracy theories are spreading fast in Africa. One rumor is that the disease itself is a hoax invented by governments to boost their power. Another is that drinking salt water can cure the disease. Researchers note that the spread of rumors and conspiracy theories is to be expected in a situation such as a terrifying outbreak, because the rumors are actually "psychologically reassuring," allowing people to restore a feeling of control in the face of an unpredictable threat. [nytimes.com]