Over in Perth (home to a couple of MOHers!) there's a rumor going around about an organized dog fighting ring that's stealing pets and using them in fights. The larger dogs are supposedly starved and turned into fighters, while smaller animals are used as "bait." A flier (below), posted on Facebook, is helping to spread the warning. 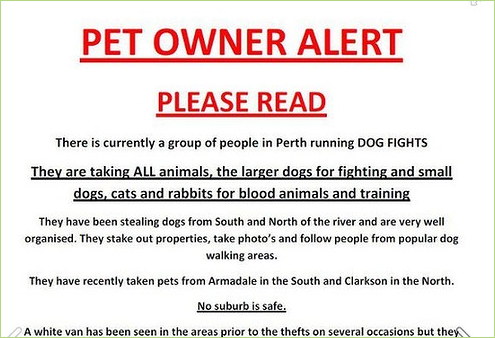 People are also being warned that the pet thieves are tagging the homes of potential victims with red dots, as shown in this picture: 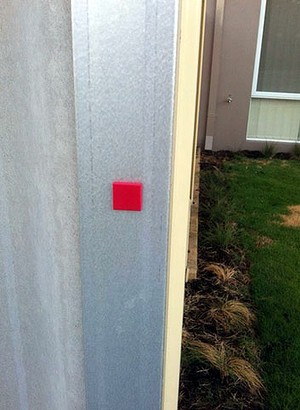 However, the police and animal welfare authorities insist there's simply no evidence that any of this is happening. Social media expert Tama Leaver is quoted as saying, "To go from dog missing to dog fight is a long bow."


Perth's vicious dog fighting hoax
watoday.com.au
The internet has been flooded with chilling tales of an organised underground dog fighting ring operating out of Perth's suburbs. Family pets have been systematically stolen from their yards to be trained as fighting dogs, according to reports appearing on social media and online classified websites this week. While many in Perth claim to know somebody who knows somebody whose pet has fallen prey to a kidnapping, authorities and social media experts have dismissed the warnings as a viral hoax.