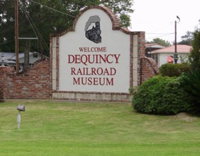 The journalist-hoaxer Lou Stone always set his hoaxes in the small town of Winsted, Connecticut, where he lived. His most famous hoax was the time in 1895 when he sent out a report over the news wire claiming that a naked, hairy, wild man was loose in the town, causing reporters from New York City to descend upon Winsted, en masse.

There now appears to be a hoaxer (identity unknown) who draws similar inspiration from the town of DeQuincy, Louisiana (population 4000), because he or she keeps issuing fake press releases, detailing bizarre events in that town.

It began in April with a press release claiming that DeQuincy mayor "Maynard Wilkens" (who doesn't exist) had decided to remove all Koreans from the town. Then, in June, came a story about a zombie attack in the town, followed in August by the claim that DeQuincy school children were all being issued guns.

Now, most recently, comes a press release stating that DeQuincy has banned twerking:


Sep. 17, 2013 – NEW ORLEANS — The dance craze twerking has become such a problem in the small town of DeQuincy, Louisiana that city officials have made it illegal. Maynard Wilkens who is the Mayor of DeQuincy spoke to CNN about the ban on twerking that takes effect at midnight. "Twerking is a defiant act against Jesus and his teachings. The rest of the country can keep their heads in the sand about this sexual act before marriage, but not the great city of DeQuincy," Wilkens said. "We will still allow dancing in DeQuincy, just no jigglin', shakin' and 'dry humping' anywhere in our city limits." Bobby Joe Williams who is the sheriff in the town told reporters about the penalties for those caught twerking. "First time offenders will receive a mandatory 30 days in the county jail. After that it will be a much harsher punishment," Williams said. "We are taking this matter serious. They're ain't gonna be no twerkin' in my city, not no more." 24-year-old DeQuincy resident Brandon Adams told reporters he does not agree with the new law. "There is nothing to do in this town, seriously. Twerking is all us kids had left and now they're taking it away from us," Adams said. "I don't see what the big deal is. At least we weren't out causing trouble, sniffing glue and breaking stuff. I guess we'll now have to go back to doing that to keep ourselves entertained."
The real mayor of DeQuincy, Lawrence Henagan, wishes the hoaxer (or hoaxers) would quit, because each time one of these fake press releases starts circulating online, he gets phone calls from reporters requesting comments.