The Demon on a Hospital Bed 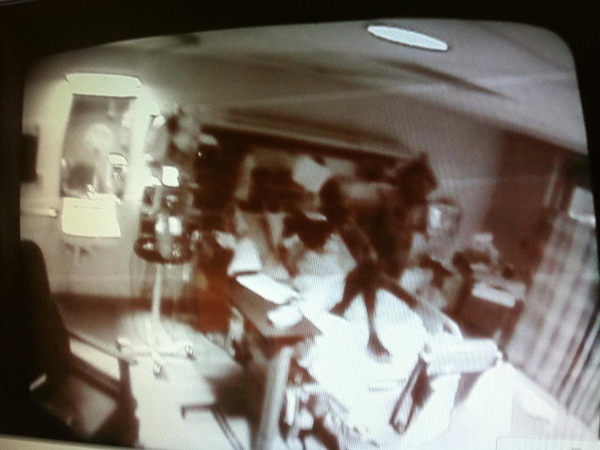 The image appears to show a dark demon squatting on top of a hospital bed. Its precise origin is unknown, but it traces back to at least December 2013 when a hi-res version of it was posted on the paranormal section of Reddit. The person who posted it (they've since deleted their account) added this explanation:


The link provided is an picture taken from a phone. This picture was taken of a nurses viewing monitor. On the monitor, this black figure appeared standing on top of the patient who was lying in the bed. I have presented the facts as they were told to me.
The image was soon picked up by a variety of sites interested in the paranormal, and by February 2014 it had gone fully viral. Somewhere along the way, a more intriguing caption was added:


“This picture was taken of a nurse’s viewing monitor. On the monitor, this black figure appeared standing on top of the patient who was lying in the bed. The patient died within a few hours of this figure appearing.”
Some paranormal sites speculated that the mysterious figure on top of the bed was a mythological being known as a "mare." Wikipedia defines a mare as "an evil spirit or goblin in Germanic folklore which rides on people's chests while they sleep, bringing on bad dreams (or 'nightmares'). The mare is often similar to the mythical creatures succubus and incubus, and was likely inspired by sleep paralysis." 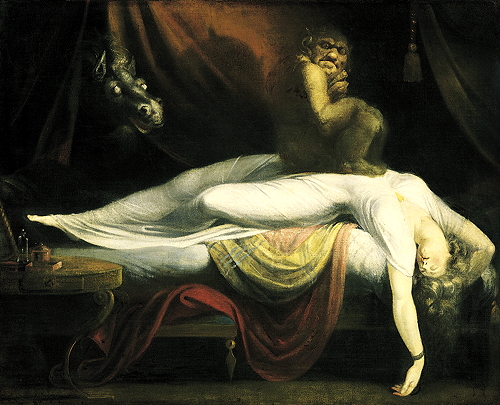 The Nightmare, by Henry Fuseli

So does the image really show a demon or a mare standing on top of a patient in a hospital bed? Of course, some choose to believe that, but as early as Dec 2013 a non-paranormal explanation had been offered, which is that the image is really just an interesting example of pareidolia. Various objects in the room (including the patient's legs, the rail of the bed, a coat, and a piece of hospital equipment) are positioned in such a way that, given the blurriness of the image, they combine to look like a "demon."

A number of edited versions of the image have been posted online that identify the parts of the creature, such as this one from metabunk.org: 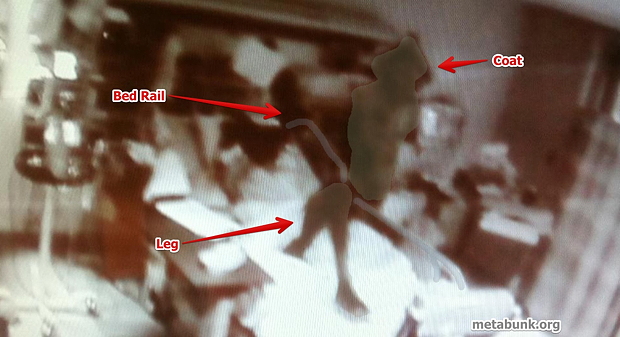