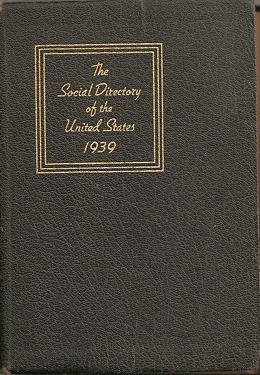 The Social Directory of the United States, published in 1939, described itself as an authoritative listing of "prominent [American] families who through culture, ancestry, tradition and aristocracy of achievement have risen and maintained the heights of social leadership."

Being included in the directory was no easy achievement, its publisher promised. In fact, inclusion was not something a person could apply for. You had to be selected by them. As the Directory's foreword explained, "It is a fact that the standard of eligibility for listing has been extremely high... After due care and upon verified information, our invitation to be listed, together with questionnaire, was mailed to those families selected. No person can buy his way into this publication. He must meet with the stringent requirements of the publishers."

The exclusivity of the Directory was such that only four families from Sioux Falls, South Dakota made the cut. One of these families was Mr. and Mrs. Fritz Arko von Schneider, who were described as being members of the Minnehaha Country Club, graduates of Heidelberg University, and having four children: Mimi, Hans, Gretel, and Sophia.

However, following the Directory's release, the inclusion of the von Schneiders caused some confusion, because the other listees from South Dakota didn't recognize who they were. And upon inquiry, it emerged that the von Schneiders weren't actually people at all. They were a pair of purebred dachshunds owned by the Sioux Falls attorney Theodore M. Bailey, of the firm Bailey & Voorhees. 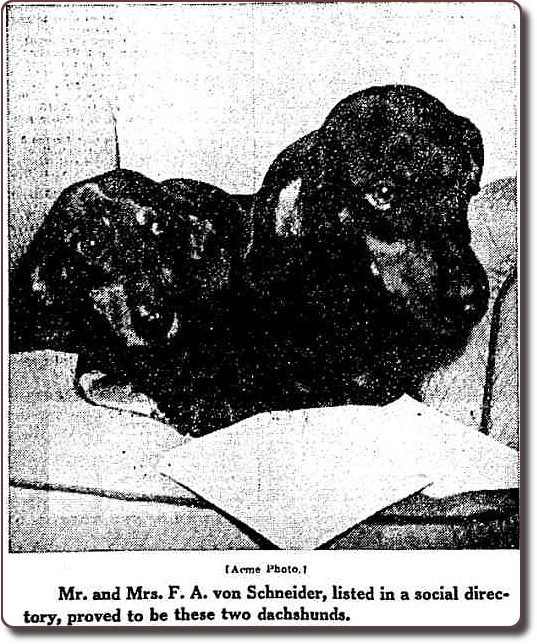 It was never explained exactly how Bailey succeeded in getting his dachshunds into the directory, given the publisher's assurance that inclusion was by invitation only. Evidently there was a flaw in their selection process. What probably happened was that the Social Directory mailed an invitation to Bailey, who legitimately was a member of a prominent family. He must have then changed the name on the invitation to that of his dogs and mailed it back.

A spokesman for the publisher simply acknowledged that it was "just a good joke on us," and added, "There was no reason to doubt the authenticity of this return because a check for a copy of the register, signed 'F.A. von Schneider' was attached to the listing."

News of the high-social-status dachshunds made headlines throughout the country. The dogs became famous enough that when Mrs. von Schneider bore a new litter of puppies six months later this also made headlines. 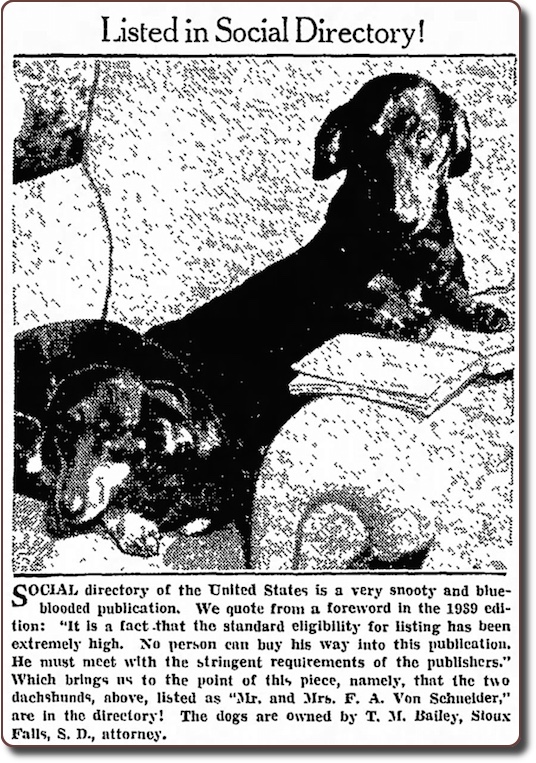 Louis Keller first published the New York Social Register in 1886, and inclusion in it soon became a coveted marker of social status. Its success bore witness to the growing size of the American upper class, which brought with it the problem that its members could no longer know by personal knowledge everyone who had attained their own level of social status. The Social Register helped to ensure that the nation's elites didn't accidentally associate with those whom they considered beneath them.

By the 1930s, the Social Register was publishing editions for major cities such as New York, Washington, D.C., Philadelphia, Chicago, and Boston. But it didn't publish a national edition.

So the publishers of the Social Directory of the United States, which was first published in the late 1930s, hoped to take advantage of this gap in the market. However, it never came close to rivaling the Social Register. In fact, it was dismissed by many as being something of a scam.

For instance, a 1938 letter in the Journal of the American Medical Association, warned its readers that many doctors were receiving invitations to be listed in the Social Directory, but it noted that, "It would appear that this publication is not in any true sense a social directory but simply a list of those who were 'stung' by subscribing to what they supposed would be something like the reputable works of this kind."

The Social Directory does not appear to have survived past 1940. The bad publicity surrounding the von Schneider dachshunds case certainly didn't help its reputation.