An albino, one-eyed shark, an image of which started circulating online back in July, has been confirmed by scientists to be real. (Link: livescience.com). Which shouldn't have been a surprise. Like the case of Cy the one-eyed kitten (from back in 2006), the mutant shark suffered from cyclopia. According to messybeast.com, this is a genetic abnormality in which, "the eyes are fused into a single enlarged eye that is placed below the nose (the nose may or may not form, if it forms it resembles a proboscis)." 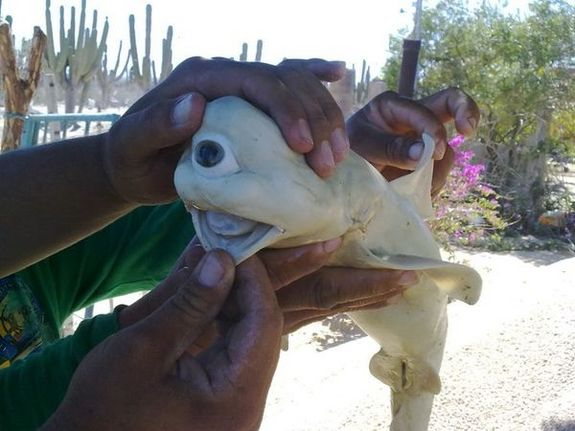 One-eyed creatures are one of those phenomena that fit into the rule that sometimes truth really is stranger than fiction. In fact, off the top of my head I can't think of any hoaxes involving fake cyclops, unless you count this old Weekly World News story from 1989: 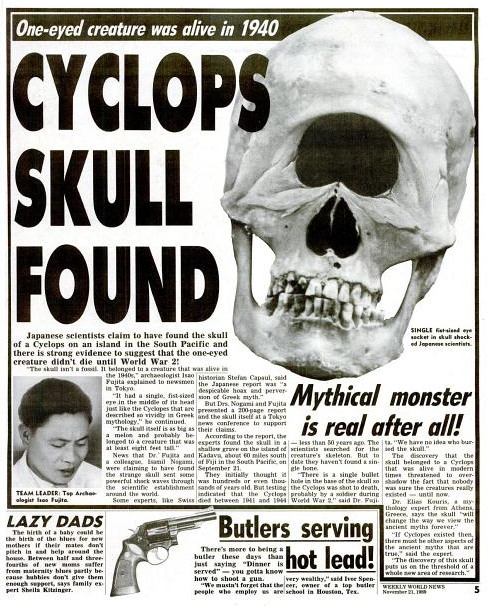 Cyclops' do exist but of course it is a birth defect and not a supernatural occurrence.
In Burma during the early 60s, my mother witnessed an infant, dead, with one eye in the centre of it's forehead.
Posted by Onyx79  on  Fri Oct 28, 2011  at  01:25 PM
The baby shark looks kind of fake, as if made of rubber, but then again I suppose all cyclops's look like that. I couldn't believe my eyes back when I saw that photo of a one-eyed kitten either.

I remember a story that my elementary teacher once told us, of how she had once known a three-year old boy whom she claimed to have had cyclopsia and an odd number of toes. She told us that his parents had tried to send him to a normal kindergarden and that he had died soon after she first came to know him. I later had quite a number of nightmares of that boy. =/ By now I think that a story like this should have resurfaced in the newspapers at some point in time and due to the fact that although our teacher was a nice lady she had a tendency of scaring us straight with talltales I'm not so sure anymore whether this story was real or not.
Posted by Cliodna  in  Estonia  on  Sun Oct 30, 2011  at  10:58 AM
"In fact, off the top of my head I can't think of any hoaxes involving fake cyclops,..."

Alex, "off the top of my head" while talking about fake cyclops. It almost sounds like a Freudian Slip 😊

Or was that a reflection of your sense of humour? 😉
Posted by Peter  in  Melbourne, Australia  on  Mon Oct 31, 2011  at  01:18 AM
Commenting is not available in this channel entry.