Creating jackalopes in the lab 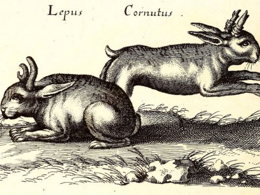 Most people familiar with jackalopes have probably heard that rabbits actually can grow small horns (though not full sets of antlers) if they're infected with the Shope papilloma virus. The "horns" are tumorous growths. Rabbits with such horns may have inspired the legend of the jackalope.

What I didn't know, but which is pointed out in a recent article about jackalopes in Wired, is that during the 1930s, Richard Shope of Rockefeller University conducted experiments to see if he could make rabbits grow these horns. In a way, he was creating jackalopes in the lab.

Shope ground up horns that he found on rabbits, mixed the horn dust in a solution, filtered it through a porcelain filter, and then applied the resulting solution to the heads of rabbits who didn't have horns. And sure enough, they grew horns.

Shope concluded, correctly, that a virus was causing the horn growth, which is why the virus is now named after him.

Shope's research eventually led to the discovery of a link between viruses and cancer. You can read more about that in an article by Carl Zimmer posted over at io9.com.