A number of videos circulating online show cars that are apparently able to change their color with the push of a button.

One such video, uploaded to YouTube in Sep 2014, shows a color-changing Subaru stopping passers-by in their tracks:


Another one, from May 2013, shows an "unbelievable color changing car."


And yet another one, from 2012, shows a Peugeot that supposedly changes color to match the mood of the driver.


Various explanations are offered for the color-changing paint. It's said to be "nano paint," "electromagnetic paint," or "paramagnetic paint." Whatever the name, the basic idea is that the paint is controlled by a magnetic pulse which alters the molecular structure of the paint's pigment, causing it to emit light at varying wavelengths.

However, none of this is true. The color change in these videos is the result of digital editing, using software such as Adobe After Effects. Such software makes it a simple process to change the color of an object in a video.

In other words, cars that can change color at the touch of a button are not a reality. In the case of the third video, the color-changing Peugeot, the video was an April Fool's Day joke.

However, there have been rumors in the automotive press of the development of color-changing paint, and this is doubtless what inspired these videos.

For instance, back in November 2007, it was reported that Nissan was developing a color-changing 'paramagnetic' paint coating. The Irish Examiner (Nov 28, 2007) offered this explanation:


The hi-tech chameleon-inspired 'paramagnetic' paint can change shade at the flick of a switch - and has the ability to reproduce any hue visible to the human eye. Before the vehicle is painted, the metal body is covered with iron oxide particles. When an electric current is applied, the spacing between these tiny crystals is altered. This miniature movement affects the way the paramagnetic layer reflects light, causing the car to change colour instantly depending on the voltage applied. When the current is switched off, the paint returns to a default shade of white. A special clear coating seals and protects the finish.
But since 2007, there haven't been any more announcements from Nissan about this paramagnetic paint.

More recently, a company called LitCoat has announced the introduction of a paramagnetic electroluminescent paint "which can change color when it comes in contact with an electric charge." However, a video of this paint shows that it doesn't change color from, say, red to green. Instead, it emits a luminescent glow when electrified.


Of course, paint that changes color in response to temperature changes has been around for a long time (over 100 years). A company called Trippin' Paints sells a temperature activated color-changing paint specifically for cars.

Update: The concept of color-changing paint has also been explored by artists. For instance, the "Nano Supermarket" is an art installation that explores speculative nanotechnology products that may exist in the future, such as "Wallsmart Programmable Paint." 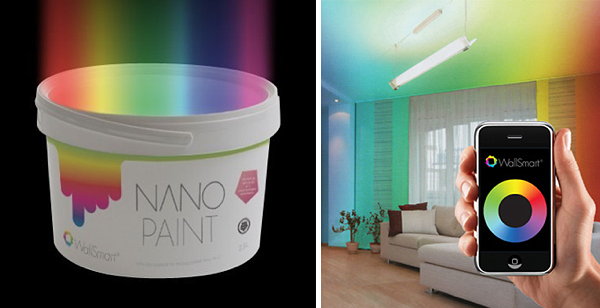 In the early '70s Volkswagen ran ads for their jeeplike vehicle called the Thing. The ads had a gimmick of the car constantly appearing in different colors (including polkadot). When my dad purchased one, we were frequently approached by people wanting us to show off the color changing ability.
Posted by Kermit  on  Wed Apr 01, 2015  at  01:21 AM
Commenting is not available in this channel entry.