Did Cleopatra Drink a Pearl Dissolved in Vinegar?

Ancient legend tells of Cleopatra's extravagantly expensive beverage. But modern scholars disagree about whether she ever really drank such a concoction. 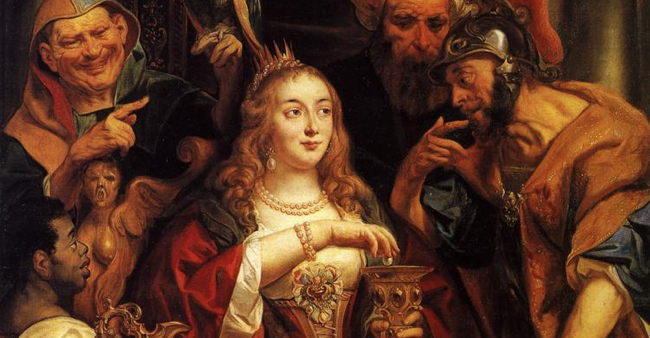 The Banquet of Cleopatra by Jacob Jordaens, 1653.
The story goes that Cleopatra bet Mark Antony she could outdo his efforts at extravagance by serving a single meal that cost 10,000,000 sesterces (this translates to about 1,764 pounds of gold — so, in modern currency, almost $30 million, or a WHOLE LOT of money). Antony couldn't imagine how one meal could cost so much, so he accepted the challenge.

The next day Cleopatra set before Antony a sumptuous meal. He laughed and said that although it was indeed extravagant, the cost hardly came to the price tag promised. She responded that this was merely the start. She then ordered her servants to bring in the next course.

They carried in a single glass of vinegar and placed it before her. On her ears she was wearing two enormous pearls — the two largest pearls in the world, left to her by oriental kings. She removed one of them, dropped it in the vinegar, and when it was dissolved, swallowed it down.

She was about to drop the second pearl in another glass of vinegar when Antony's ally Lucius Plancus, who was refereeing the bet, stopped her and declared her the winner.


Did it actually happen?
The pearl dropped in vinegar is one of the most famous tales about Cleopatra, second only to the story of her suicide by the bite of an asp.

The story first shows up in the Natural History of Pliny the Elder, written in 77 AD — over 100 years after the death of Cleopatra, who died in 31 BC. In subsequent centuries, the scene was described by many other writers, and was also memorialized in numerous paintings. It was a particularly popular subject for painters during the early-modern period because it fit into the fashion for painting lavish dining scenes. And during the 20th Century, it was often depicted in newspaper cartoons, and was even featured in several ad campaigns. But all these retellings ultimately rely on Pliny as the primary source. 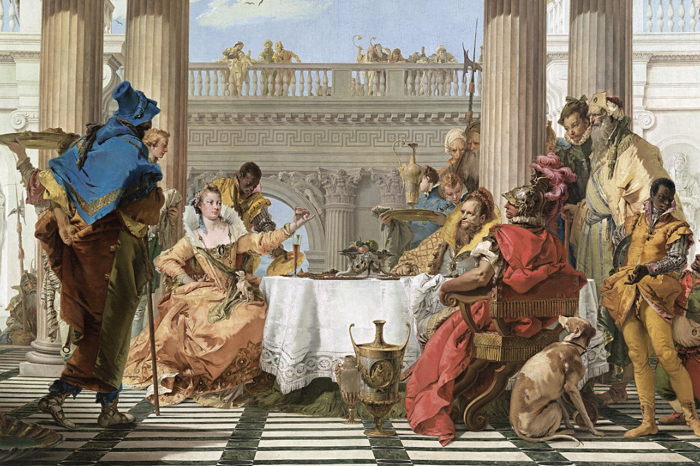 The Banquet of Cleopatra by Giambattista Tiepolo, 1744 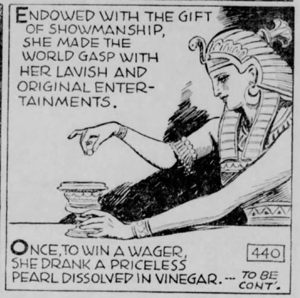 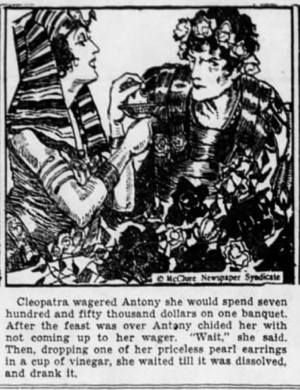 Is the story true? Ancient writers accepted the veracity of the tale, and commentators continued to take it at face value up until the mid-nineteenth century. But since then the story of the pearl has been the subject of ongoing debate and disagreement.

So let's begin where the debate usually starts — with the question of whether pearls will dissolve in vinegar, because if they don't the story obviously can't be true.


Do Pearls Dissolve in Vinegar?
According to many classical scholars, vinegar definitely does not dissolve pearls.

Herbert Wethered, in The Mind of the Ancient World (1937), tells us that, "it seems a pity for the sake of the story that pearls do not dissolve in ordinary vinegar." Likewise, Harris Rackham in his 1940 translation of Pliny wrote that "no such vinegar exists" that will dissolve pearls. More recently, John Healy in Pliny the Elder on Science and Technology (2000) says, "No form of acetic acid can dissolve a pearl."

Unfortunately, what this demonstrates is that many classical scholars aren't very good at chemistry, because they're wrong. Pearls will dissolve in vinegar.

Not only were they wrong, but the correct information has been available, if they had looked for it. As early as 1881 the German classicist Ludwig Friedländer conducted an experiment showing that vinegar will dissolve pearls. Similar experiments have been conducted in 1957 by Berthold Ullmann of the University of North Carolina at Chapel Hill (1957) and in 2010 by Prudence Jones of Montclair State University. Nowadays you can also find videos on YouTube of people conducting the pearl in vinegar experiment.


What all these experiments show is that if you drop a pearl in a glass of vinegar, it'll dissolve — but very slowly. You need to wait a couple of days for full dissolution.

So Cleopatra couldn't have dropped a pearl into a glass of vinegar, stirred it up, and watched it dissolve like an alka-seltzer in water. In other words, the pearl scene could not have occurred exactly as Pliny described it.

However, there are other options. If you heat the vinegar, the pearl will dissolve much more rapidly. In hours rather than days. But again, Pliny says nothing about boiling the vinegar.

But there's a third possibility. If you first grind up the pearl (which is easy to do with a pestle and mortar), and then sprinkle it into the vinegar, the powder will dissolve in a few minutes, even in cold vinegar. Both Ullmann and Jones are inclined to believe this is what happened.

Ullmann theorizes that Antony and Cleopatra were actually using the pearls as a kind of alkaline, to prevent acid indigestion after a heavy meal. Pearls (cheap ones) were definitely used in this way during the middle ages up until the early modern period. Both Francis Bacon and Shakespeare refer to this practice. The pearls would usually be dissolved in vinegar and then mixed with wine. So it's quite possible people in imperial Rome used them in this way too.

Jones, on the other hand, doesn't think we need to come up with a medical reason to explain Cleopatra drinking pearls. She finds the story quite plausible taken at face value, as a story of conspicuous consumption. At the very least, she argues, we should give the story the benefit of the doubt because it could have happened.

Adrienne Mayor, a research scholar at Stanford University's Departments of Classics and History of Science, agrees with Jones. She told Discovery News, "It's likely [Cleopatra] softened the pearl in advance, then crushed it and placed it in a goblet to dazzle Marc Antony with her wealth and arcane scientific expertise."


The Pearl in Vinegar Story As An Urban Legend

So we have some scholars who are willing to accept the story of Cleopatra and the pearl as true. But there's another group of scholars who realize that pearls will dissolve in vinegar, but nevertheless doubt the story, and the reason they're skeptical is because they think it sounds like an urban legend.

Their urban-legend alarm goes off because Cleopatra wasn't the only person said to have drunk vinegar-dissolved pearls in the ancient world. Similar stories were told of two other people.

The first version of the pearl dropped in vinegar tale appears in the Satires of Horace, written around 33 BC (which is around the time when Antony and Cleopatra were hanging out together in Egypt). In a poem about the madness of profligacy, Horace wrote that the spendthrift son of the actor Aesopus once took a pearl hanging from the ear of a young woman named Metella and dissolved it in vinegar, intending to find out what it would taste like to drink a million sesterces. Valerius Maximus, writing during the reign of Tiberius (14 AD to 37 AD), repeated the story of the son of Aesopus in his Nine Books of Memorable Deeds and Sayings.

Pliny's account of Cleopatra drinking a pearl, which he wrote around 77 AD, is then the second version of the tale.

Finally, we find a third version of the tale in The Twelve Caesars written by Suetonius around 121 AD, in which we learn that drinking pearls dissolved in vinegar was just one of the decadent extravagances engaged in by the Emperor Caligula:


In reckless extravagance he outdid the prodigals of all times in ingenuity, inventing a new sort of baths and unnatural varieties of food and feasts; for he would bathe in hot or cold perfumed oils, drink pearls of great price dissolved in vinegar, and set before his guests loaves and meats of gold, declaring that a man ought either to be frugal or Caesar.
So we have a trio of similar tales, and this fits the pattern of an urban legend.

An East German scholar, Ilye Becher, pointed out in her 1966 doctoral dissertation that the story improves over time, which should also raise our suspicions because legends often get exaggerated as people retell them. In the first version of the tale, the dissolved pearl is worth one million sesterces, but over time the value inflates to ten million sesterces. And the story gets attached to more famous people: Cleopatra and Caligula.

Andrew Turner, of the University of Melbourne, further notes that pearls had a particularly potent symbolic meaning when these tales circulated, because the pearl was associated with eastern decadence that was corrupting Roman virtue:


Consolidation of Roman rule in the East in the early imperial period had led to massive imports of luxury goods; pearls in particular became available in Rome in great numbers after the fall of Alexandria, and Pliny specifically cited them as contributing to moral corruption in Rome.
Seen from this perspective, the tale originated out of people's concerns about the changing character of Roman society caused by the enormous fortunes being created by imperial expansion. And over time the tale was attached to celebrities of the era to make it more dramatic. But like many of the urban legends about modern celebrities, it probably wasn't true.


Conclusion
The tale of Cleopatra drinking a pearl probably isn't true, but on the other hand, that doesn't mean it's necessarily false.

It's possible that Cleopatra, Caligula, and the son of Aesopus had all heard about the idea of drinking pearls and that this inspired them to actually do it. Folklorists call this "ostension," when (in the words of Jan Harold Brunvand) "people actually enact the content of legends instead of merely narrating them as stories."

In other words, drinking pearls could have been a popular (and shockingly scandalous) way of showing conspicuous consumption in ancient Rome, and the stunt was repeated by a number of different people, including Cleopatra.

So it's possible that Cleopatra drank pearls, as Ullmann, Jones, and Mayor argue. However, I'm still inclined to doubt that she did, and the reason for my suspicion is basically because I don't believe Pliny.

Literal, objective truth wasn't something that ancient biographers placed great value on. The important thing for them was to accurately convey what they believed to be the essential character of a person, and they would happily accept any story that fit this purpose. So Pliny probably heard the story of Cleopatra and the pearl, which had become attached to her in the 100 years since her death, and since he believed that she was arrogant and decadent, he accepted it as true.

But should we accept it just because Pliny did? I don't think so. But on the other hand, I concede that it's possible she drank the pearl.

Ultimately, there's no way to come up with a definitive answer. Maybe she drank the pearl. Maybe she didn't. We'll never know.