Game.co.uk is selling something they call "Christmas Tinner," which it describes as "the ultimate innovation for gamers across the nation who can’t tear themselves away from their new consoles and games on Christmas Day." 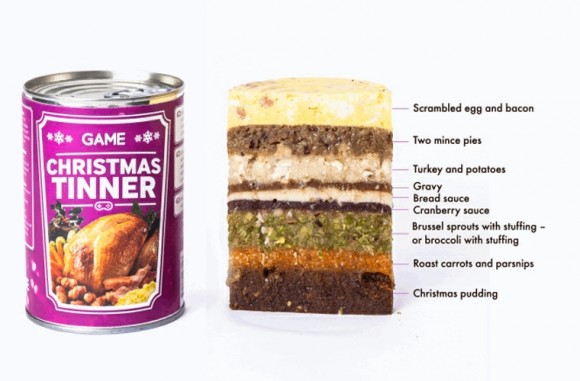 It's an entire Christmas Day meal, from morning to night, conveniently layered into one tin:


Layer one – Scrambled egg and bacon
Layer two – Two mince pies
Layer three – Turkey and potatoes
Layer four – Gravy
Layer five – Bread sauce
Layer six – Cranberry sauce
Layer seven – Brussel sprouts with stuffing – or broccoli with stuffing
Layer eight – Roast carrots and parsnips
Layer nine – Christmas pudding
However, the product is listed as "SOLD OUT — Check Back Christmas 2014." But it seems that it's always been "Sold Out," which makes it a near certainty that Christmas Tinner is a joke product.

It reminds me of those stories of gamers who use pee pots so that they won't ever have to move from in front of their computer.

It exists
Review: http://www.youtube.com/watch?v=iaICKru7DfQ
Posted by anonymous  on  Sun Dec 15, 2013  at  01:01 PM
Commenting is not available in this channel entry.