Cat Gives Birth to a Chihuahua

Jia Weinuan, a 74-year-old man who lives in China, claims that his cat has given birth to a Chihuahua. As absurd as the situation sounds, I actually suspect this may not be a hoax (although I don't think the young animal really is a Chihuahua). Edit: I changed my mind. I initially suspected the Chihuahua-cat may have been some kind of genetic mutant — a kitten deformed in such a way to resemble a puppy. But the more I look at the pictures, the more I think it's a dog, because its snout looks too canine. 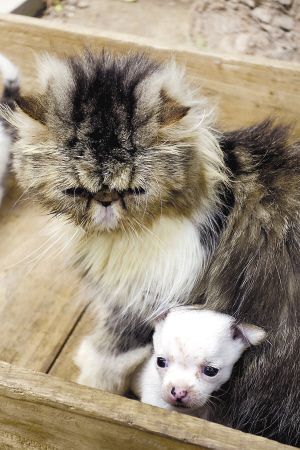 But first, the details (via the Daily Mail). The mother cat involved in this situation is an American Shorthair called Niuniu. The father is a male shorthair. Niuniu gave birth to a litter of five kittens, one of which looks an awful lot like a Chihuahua.

Not only does the Chihuahua-kitten look very dog-like, but also it makes a "chi chi" sound instead of a mew. And then there's its private part, which, much to Jia's puzzlement and consternation, is in the right place for a dog, but the wrong place for a cat.

Could the cat have been impregnated by a dog? Well, Jia does own five dogs, in addition to the cats, but he insists that no funny business was going on between the dogs and cats, because Niuniu is a "good cat" who would never "do bad things without us knowing." And anyway, even if the cat did somehow mate with a dog, genetics would prevent an offspring. So I think we can rule that scenario out. 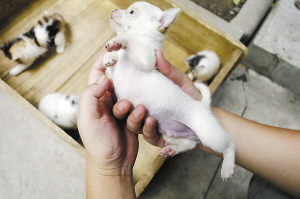 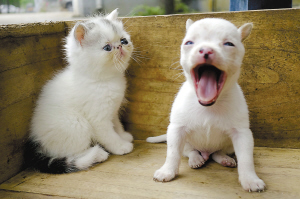 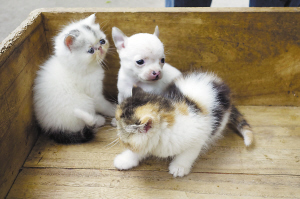 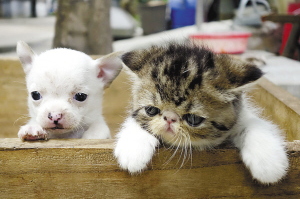 Images via the People's Daily Online

Is this a hoax? The entire story does rest upon Jia's word. We have to trust that he didn't surreptitiously place a puppy in among the cat litter. But Jia is adamant that this is NO HOAX as far as he's concerned!

But what if someone else placed a dog in amongst the kittens? Or what if someone switched a kitten for a puppy? Both are possibilities. But Jia says he personally cut the umbilical cord attaching the Chihuahua to the mother cat, so he knows that the Chihuahua is definitely the child of the cat.


Previous Cases of Cat-Dogs
Last year I posted about the 1937 case of the Kuppies. The owner of a roadside barbecue stand in Miami, Florida claimed that her maltese cat gave birth to three kittens and two puppies (aka "kuppies"). But circumstantial evidence later suggested that someone had switched two of the kittens for puppies. So we can ignore the Kuppies. 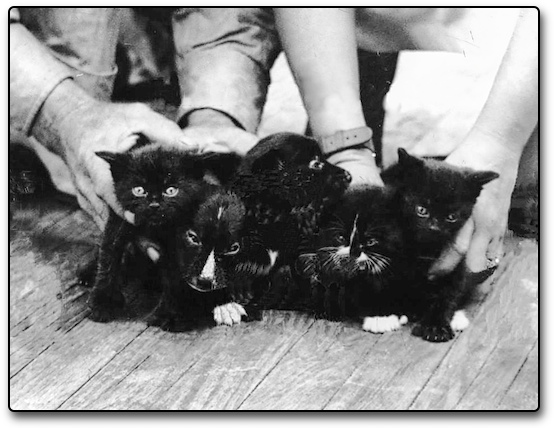 But a more intriguing case (also from 1937) is that of Nonesuch, the Cat-Dog. Again, a cat gave birth to a creature that looked very much like a dog. Nonesuch attracted scientific interest. She was examined by Henry Sternberger, who wrote a report about her that was published in the Journal of Heredity (vol 28, no. 3). Sternberger confirmed that Nonesuch looked like "a black, white, and yellow spotted dog," but was nevertheless definitely a cat. Nonesuch proved this by giving birth to a litter of kittens a year later. 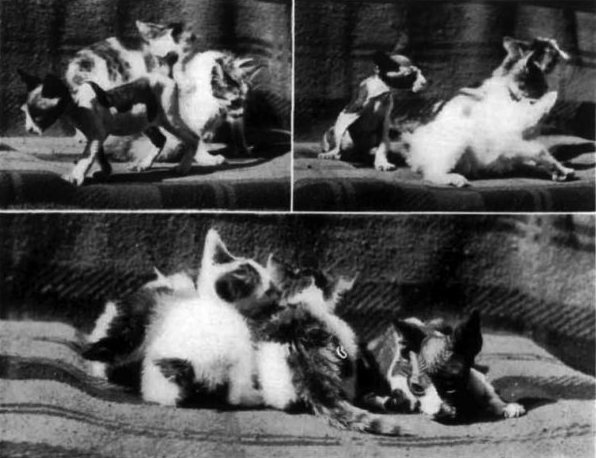 There's yet another case. In 2006, I posted about three kittens born in Brazil that looked like dogs. Blood tests determined that, despite their unusual appearance, they were definitely feline.

So the cases of Nonesuch and the Brazilian kittens demonstrate that it's possible for cats to give birth to kittens that look like dogs. It's rare, but it can happen. And I suspect this may be what has happened over in China.

But, of course, who knows! Perhaps the Chihuahua kitten is a complete hoax. Only scientific testing will provide a definitive answer. But I wouldn't rule out the possibility that Niuniu really did give birth to a kitten that looks like a Chihuahua. Never underestimate how weird Mother Nature can be!

Edit: To my embarrassment, I somehow misread the 2006 case and thought that it said the "puppies" had been confirmed to be felines. But no, it said the exact opposite. The case was a hoax. The puppies were pure canine. (Don't know how I managed to misread that. Was writing the post too late at night.)

This means that there's only one genuine case of a cat that looked like a dog (Nonesuch), and several cases of hoax cat-dogs. Which suggests the Chinese Chihuahua-cat is also probably a hoax.

Although, the website messybeast.com discusses the phenomenon of hairlessness in cats, which is a rare trait that can occur randomly "due to mutation or hidden recessives." And these hairless cats sometimes look very dog-like. Nonesuch probably had the hairless gene. The photo below shows a hairless cat photographed in Yemen. 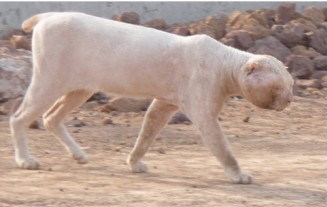 We'll have to wait and see if blood tests are done on the Chinese Chihuahua-cat to provide a definitive answer about what species it belongs to.

Um.... your link says the blood test proved the Brazilian case did NOT give birth to the puppies... http://hoaxes.org/weblog/comments/cat_gives_birth_to_puppies
Posted by Crystal  on  Tue May 12, 2015  at  04:18 AM
Crystal -- I'm an idiot. I don't know how I managed to misread that case. Thanks for the correction. And now I think I was being swayed too much by the idea that the Chihuahua-cat was some kind of weird genetic anomaly. It just looks TOO dog-like. Wonder if they'll ever do blood tests to provide a definitive answer.
Posted by The Curator  in  San Diego  on  Tue May 12, 2015  at  07:34 AM
I'm pretty sure that's an actual dog... but I guess we'll see if they ever do a test. I'm still trying to wrap my head around that green cat that was apparently real, I was so sure it was some kind of trick.
Posted by Crystal  on  Tue May 12, 2015  at  06:11 PM
Commenting is not available in this channel entry.