I use Google news alerts to find out whenever various keywords I'm interested in appear in news stories or on websites. One of these keywords is "Cardiff Giant". This particular keyword search doesn't usually generate many results. Perhaps one or two a week. But on friday night my patience was rewarded when I got a google news alert about the creation of a new site: cardiff1869.com.

The site is the creation of a Pasadena-based artist who chooses to remain anonymous, using the alias "Cardiff1869". Inspired by the Cardiff Giant of 1869 (which I posted about just a few days ago), he (or perhaps she) is creating a limited series of small-scale replicas of the Cardiff Giant. And he's leaving these miniature giants at various public locations around Pasadena. He explains:


These Cardiff1869 art installations are meant to be found at random by lucky passers-by (known as “Finders” on this web site) who then become a special part of the Cardiff1869 Free Art Project by discovering their own little “Cardiff Giant”.

The primary goal/intent of the Cardiff1869 Project is to allow people to experience the unique joy and wonder of discovering a free and anonymous gift of hand sculpted art, and to allow them the rare opportunity to ponder its mysterious origins and significance, just as the public did back in 1869 when the original Cardiff Giant was discovered.
In the past, I've actually searched quite extensively to find out if anyone had ever created small replicas of the Cardiff Giant, because while it would be impractical for me to keep a full-scale, ten-foot stone giant in my house, I very much wanted to have a smaller version of the giant to call my own. So to find out that little Cardiff Giants were being placed around Pasadena, which is only 2 hours away from where I live, seemed too good to be true.

I briefly wondered whether it was all a hoax. I also wondered whether it would be cheating to purposefully look for the statues. So I emailed Cardiff1869 who assured me that, "Purposefully looking for an installation is common in Street Art. No worries. There is a large sub-culture of Street Art fans who are always on the lookout for new works by their favorite artists - especially the 3D/Sculpture type 'Street Installations' they can actually take and keep."

So early the next morning I dragged my wife out of bed (she was quite willing to humor me and go along, which is one of the reasons I'm so lucky she married me), and we headed up to Pasadena to search for Cardiff Giants.

According to the Cardiff1869 site, six giants had been placed, and four of them had already been found. That left only 2. We quickly confirmed that one of these was also gone, and then spent a fruitless hour-and-a-half searching for the other one, which was supposed to be somewhere on Magnolia St.

I was feeling pretty downbeat, thinking I wasn't going to find a giant. But then my wife and I checked the Cardiff1869 site again and discovered that, just that morning, two more giants had been placed. We must have looked like contestants from the show Amazing Race as we sped toward the new locations. I jumped out of the car at an intersection and sprinted across the road to the WWI Veterans Memorial where one of them was placed. It was still there, placed on a piece of slate surrounded by a circle of stones! 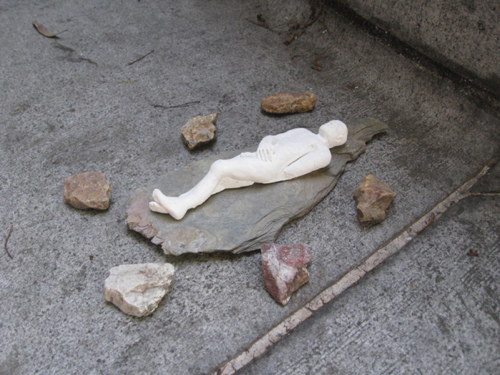 Within half an hour we had located the second one, which was placed on the Colorado St. Bridge. Here I am, moments after finding it. Note that I wore my Marvin's Marvelous Mechanical Museum t-shirt for the hunt, since Marvin's Museum has a Cardiff Giant replica on display. (Kind of nerdy, I know, but I was having fun.) 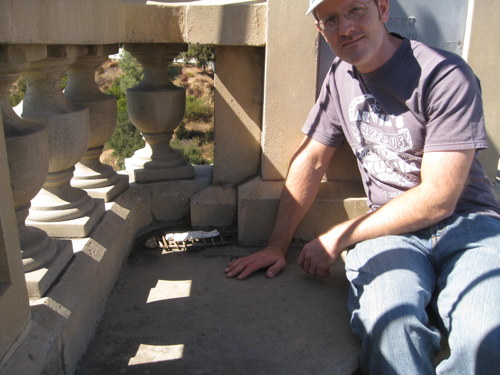 So I'm now the proud guardian of two little Cardiff Giants. Here's a photo of one of them meeting some of the other residents of the Museum of Hoaxes. 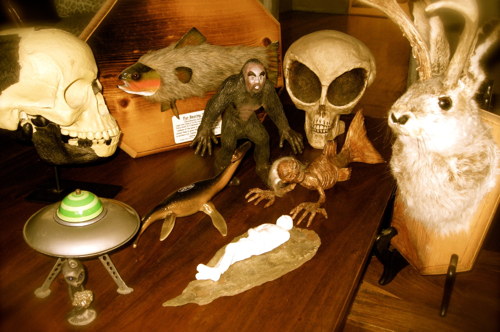 Cardiff1869 tells me that one of the giants — the one on Magnolia St. that I searched for but couldn't find — is still there waiting to be found! Plus, he'll soon be placing more giants. So if you live in the LA area and you're interested in a treasure hunt to find a Cardiff Giant, now's your chance. Keep watching his site to find out the new locations. I had great fun searching for the giants, and I want to thank Cardiff1869 for taking the time to put together such a great project!

So what am I going to do with my giants? One of them I'd like to send on a round-the-world tour — like a traveling gnome adventure. A while back Nettie tried to organize a MoH traveling gnome project, but I completely botched the project. She sent me the gnome, Bumpkin, which I then passed on to a friend of mine here in San Diego who was doing a driving tour of the midwest. Unfortunately my friend lost Bumpkin's legs somewhere in the midwest. So that ended Bumpkin's adventures. I've felt responsible for killing Bumpkin ever since.

So anyway, to partially make up for that previous disaster, I'm happy to send you the Cardiff Giant first, Nettie, if you're interested. And anyone else who wants to participate in the Cardiff Giant's world tour, let me know. We'll put together an itinerary for him.

As for the second cardiff giant — I plan eventually to relocate him somewhere. When I find him a new home, I'll post the details.

I'm game for the world tour. And open to anytime, so plug me into the itinerary at any point.

Given what I paid for it, it's probably a replica. Though I'm not sure what the distinction would be. The reproduction of the piltdown man skull is the only relatively pricey object in that photo.
Posted by The Curator  in  San Diego  on  Sun Oct 09, 2011  at  04:57 PM
I've seen the 'original' Feegee Mermaid (at least, I think it was) along with some of Barnum's other gewgaws on display at a Ripley's museum. Can't remember if it was the San Francisco or Los Angeles branch, though... Think it was the San Fran one. Was a couple decades ago.