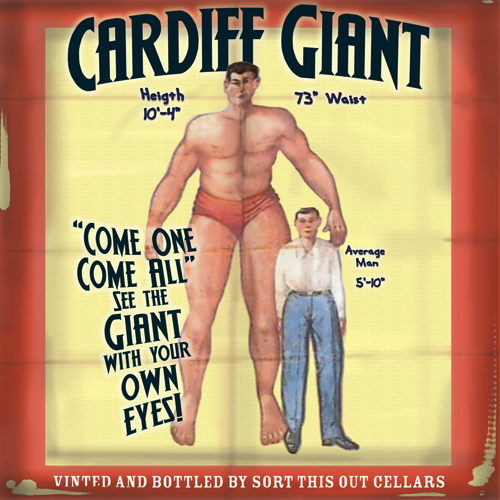 Sort This Out Cellars has announced the imminent return of its Cardiff Giant Wine, which it describes as "one of our most popular wines ever."

I've come across quite a few hoax-themed beers (Bigfoot Ale, Nessie's Monster Mash, Jackalope Ale, etc.), but not many hoax-themed wines. I always assumed that wine marketers thought that hoaxes were too low-brow to appeal to the sophisticated tastes of wine drinkers.

The illustration of the Cardiff Giant on the wine label comes from a poster created by the sideshow banner artist Fred G. Johnson in the 1930s or 40s. But I'm not sure Sort This Out Cellars realizes this, because the blurb on the back of the label (from the 2005 bottling) describes it as an "1869 carnival poster," which it isn't. It's pretty obvious the artwork couldn't be from 1869 because the "Average Man" in the picture isn't wearing nineteenth-century style clothing. 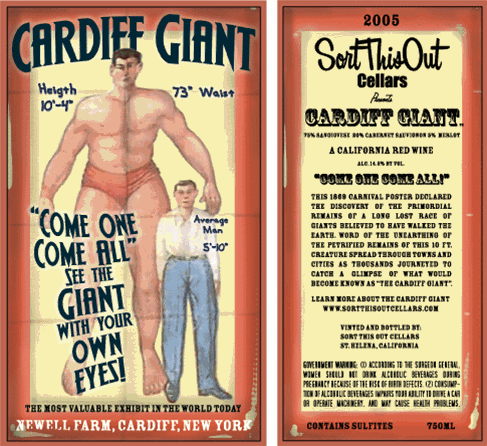 For the true Cardiff Giant enthusiasts out there, Sort This Out Cellars is also selling Cardiff Giant coasters. [Correction: it was selling them. They're now out of stock.] 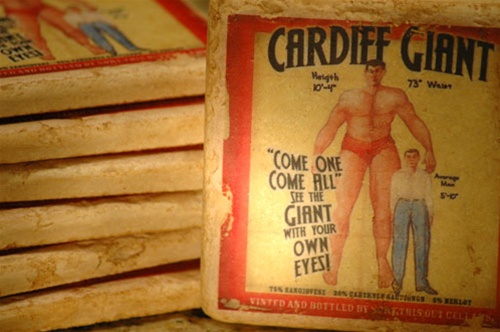 And they managed to spell 'height' incorrectly.
Posted by AqueousBoy  on  Thu Jan 16, 2014  at  06:13 AM
Commenting is not available in this channel entry.