Car lands on roof of house—real or fake?

About two weeks ago a story hit the news wires about a car that landed on the roof of a house in Fresno, CA. The story goes that Benjamin Tucker stole the car, was driving fast, but lost control as he was going round a corner and hit some landscaping rocks, causing the car to become airborne. And it flew through the air until it landed on the roof of a nearby house. 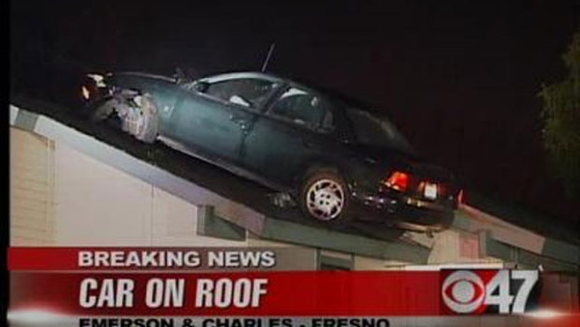 The autoshopper blog points out that this chain of events is highly improbable:


Let’s put together some relevant facts for the sake of reason. The speed limit was 30 MPH, which suggests really high speeds might be difficult to attain on a small community road. The apartment received no major interior or structural damage. It also seems insanely improbably that small landscaping rocks would cause a car to receive more than a few feet of lift. Ergo, the current official explanation is a bit difficult to stomach.
So could the story of the car that landed on a roof possibly be a prank, or a hoax? Well, putting cars on top of buildings is a classic prank. For instance, back in 2006 I blogged about a car-on-a-roof senior prank. But I haven't seen anything related to this current story to suggest it was a prank. Apparently the driver leapt out of the car once it landed on the roof, fell to the ground, and broke his leg. So if it was a prank, the joke was on him.

Unless some other details emerge, I'm going to have to go with the car getting up there by accident, as unlikely an event as that might have been.

I'm sure we've all seen that car that flips over a wall and "parks". I presume the police would have done their measurements to find out the speed of the above vehicle, so where is that info? Someone guessing they were doing not much more than 30mph isn't exactly the scientific way to look at it, but without being able to see the images (at my work) I don't know how improbable this is.
Posted by Mr R  on  Thu Jan 19, 2012  at  12:37 AM
I'm sure you've all heard of other incidents that seem wholly unlikely and yet occurred. For example, there have been incidents of cars becoming tangled by their tires in overhead power lines. That always seems beyond unlikely but it has been documented. http://www.google.com/url?sa=t&rct=j&q=&esrc=s&source=web&cd=7&ved=0CGAQFjAG&url=http://www.imagepoop.com/image/3308/Car-Hanging-From-Power-Lines.html&ei=dUcYT5r4J8X-8QPzisGzCw&usg=AFQjCNFdrmsrYTpO8_wf0Lo3Y1iWz6SsBA&sig2=BntvkNYtzVLET8w-L5c0qw

So, however improbable it might be the reality is that it is entirely possible. A high rate of speed and hitting something as simple as a curb is often enough to redirect that forward momentum into an arc.
Posted by ceredur  on  Thu Jan 19, 2012  at  08:43 AM
This isn't quite so impressive, but it happened just down the road from me a few years back.
http://www.dailymail.co.uk/news/article-499514/Death-crash-car-launches-road-floor-flat.html
Although I never saw it reported, so can't say for sure (because obviously reported news is always accurate), the grapevine has it the poor guy actually suffered a severe heart attack, causing his foot to ram down hard on the accelerator. Obviously, that wasn't what everyone was saying when it happened. They merely assumed he'd been dangerously speeding with his nine year old son in the car, because it makes them feel superior.
Posted by Paul Taylor  in  Peterborough, UK  on  Thu Jan 19, 2012  at  11:30 AM
Jeeze Paul, that's a true horror story.
Posted by hulitoons  in  Abingdon, Maryland  on  Fri Jan 20, 2012  at  08:24 AM
It certainly could have been a lot worse, though. The young son and the girl who owned the flat, not to mention any number of other road users and pedestrians, had a near miss.
Posted by Paul Taylor  in  Peterborough, UK  on  Fri Jan 20, 2012  at  09:47 AM
Is there anything to say that the roof of that house wasn't lower than the road that the car was driving on? There are plenty of houses here where I am in the mountains that could easily have a low-speed car land on their roof, even without convenient rocks to launch off of. It doesn't take all that much force for a car to go off of a bridge or embankment onto a house below.
Posted by Accipiter  on  Sat Jan 28, 2012  at  03:05 PM
Something I heard about in high school, which inspired a similar prank that involved the auto shop students and a VW beetle.
http://www.telegraph.co.uk/news/uknews/2210696/Cambridge-Universitys-1958-car-on-roof-prank-secrets-revealed.html
Posted by tadchem  on  Thu Feb 09, 2012  at  11:42 AM
This happened in Germany a couple of years ago