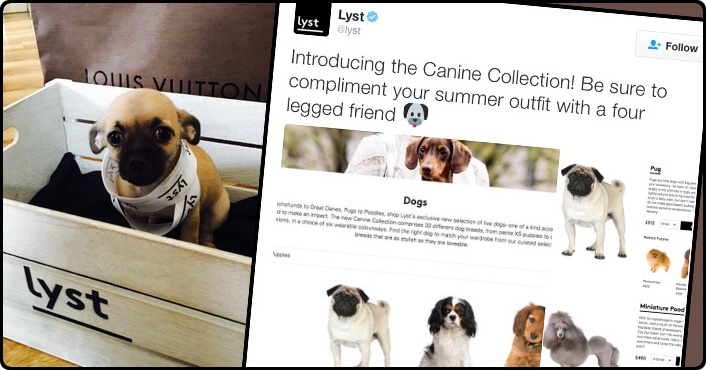 On May 9, 2016, the online fashion retailer Lyst announced that it was branching into a new line of business. It would be selling dogs — as fashion accessories. A post on its Twitter account urged people to "compliment your summer outfit with a four legged friend."

Visitors to Lyst's website were greeted with a shopping gallery that displayed dogs ranging in size from petite XS to oversized. "Find the right dog to match your wardrobe from our curated selection of breeds that are as stylish as they are loveble," potential shoppers were told. 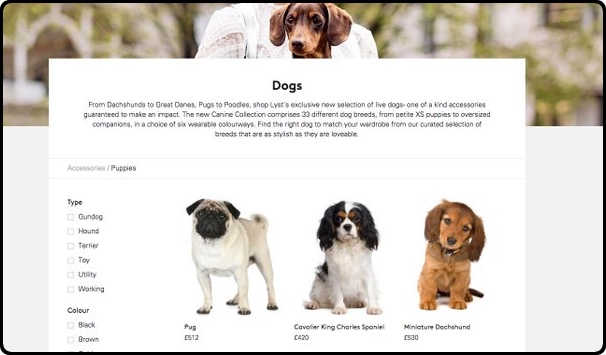 Throughout the day Lyst continued to post updates on its Twitter account, encouraging people to "Pre-order your puppy today!" And warning that, "we're running very low on French bulldogs so be sure to order now or never!"

The company also retweeted posts from people claiming to have already received their new fashion-accessory dog from Lyst.


Reaction
The response on social media was swift and angry. A flurry of tweets and Facebook posts condemned the "Canine Collection."

This is DISGUSTING. Dogs are not accessories nor should they be shipped and sold for such low prices @lyst https://t.co/KEnXwjXuC2

@lyst Seriously, there's morethan 100K abandoned dogs that have to find homes or are killed each year & you're marketing them as ACCESSORIES

Don't buy a dog bc it matches your damn outfit. Buy (or adopt!!) the dog because you can provide a great life and companionship @lyst

Of course, many people suspected a hoax, but when asked directly if it was really selling dogs, the company was evasive. In response to a query from Yahoo! News, a Lyst spokesperson said, "We were surprised to see the negative reactions on social media — the very space where dogs are paraded as accessories the most. Who doesn't love a cute puppy in a handbag? We're just helping you buy both pieces of the Instagram shot at once."

Some people contacted the RSPCA, urging it to get involved and stop the sale of dogs as fashion accessories. The RSPCA tweeted back that it had indeed been trying to contact Lyst, but had received no response.


The Hoax Revealed
The following day, Lyst posted a disclaimer on its website revealing that "Of course you can't buy puppies and dogs here, we sell clothes not canines." So, as many had suspected, the Canine Collection was a satirical campaign.

A large clue that this had been the case (in addition to the general outrageousness of the concept) was the fact that, despite the retweets from supposed dog buyers, it was impossible to actually buy a dog from Lyst. Anyone who clicked on the purchase button was linked to an email address 'caninecare@ly.st'.

The purpose of the hoax, Lyst explained, was to draw attention to the thousands of dogs bought and abandoned every year. To reinforce this message, the company then tweeted a series of statements such as, "Dogs are not a fashion accessory — a dog is for life, not just for Instagram."

The company also highlighted the amount of attention its marketing hoax had created. For instance, it listed the "major publications that spread the message."

The number of dogs abandoned each year: 3.9 million+. The truth behind the #CanineCollection https://t.co/JtQhT2BMcy pic.twitter.com/Hrmdk5Kibu


The company later claimed that not only had its hoax drawn attention to the problem of people treating dogs as mere fashion accessories, but it had also fooled many people. Lyst said that it had been "inundated with requests to purchase a pup. More than 100 people e-mailed to preorder a French Bulldog."


Corporate Activism
The hoax represented a decision by Lyst to embrace corporate activism (defined as the purposeful decision by a company to take a stand on a political or social issue). The company's head of global communications promised that in the future the company would be launching more "provocative" campaigns.

Slightly more unusual was its choice to pursue its activism by means of a hoax.

The use of hoaxes to raise social awareness is an old phenomenon, but traditionally this has been done by individuals or political groups. For instance, one of the earliest examples of a social-activism hoax dates back to the early 18th Century, when author Jonathan Swift published a pamphlet arguing for what he called a "Modest Proposal" — which was that the problem of Irish poverty could be solved by feeding the unwanted babies of the poor to the rich. His satirical purpose was to raise awareness both of the problem of poverty and the exploitation of the poor by the rich.

During the early 21st Century, the social activist duo known as the Yes Men have frequently used hoaxes to draw attention to issues. Perhaps their most famous hoax was in 2004 when one of them, pretending to be a representative of Dow Chemical, told the BBC that the company was going to accept full responsibility for the chemical disaster in Bhopal and pay $12 billion in compensation to the victims. The faux news caused Dow's stock value to immediately drop.

It's only been in the 21st Century that corporate-sponsored hoaxes have become common. In 2016 alone there have been several of them. Lyst's Canine Collection hoax was one, and earlier in the year the supermarket chain Lidl participated in a hoax purporting to promote pink soccer balls for women — the eventually revealed goal of that spoof was to satirize how women's sports often are trivialized.


Why have some companies embraced hoaxing?
Companies traditionally try to build a relationship of trust with consumers. So why has it become fashionable for companies to deliberately perpetrate hoaxes? There are two reasons.

First is because of April Fool's Day. During the late 20th Century some companies (BMW and Taco Bell most famously) had great success running lighthearted spoof campaigns on April Fool's Day. This demonstrated that, under certain circumstances, the public was willing to accept and even celebrate a corporate-sponsored hoax. It could show that the company had a sense of humor. As a result, other companies rushed to imitate the strategy, and every April 1st now sees a flood of spoof ads. This removed the stigma from the idea of corporate-sponsored hoaxes.

The second reason is the rise of social media. This has encouraged companies to craft campaigns that will "go viral" online — attracting attention at minimal cost. Hoaxes happen to be an extremely effective method of creating viral content. So companies have begun to embrace hoaxing. As Lyst's chief marketing officer, Christian Woolfenden, noted, "A hoax is a brilliant way to let a marketing narrative unfold."

Of course, it's still a risky strategy for a company to perpetrate a hoax (particularly a non-April-Fool's-Day hoax), because it might cause negative backlash. People might get angry at the company for deceiving them, or they might feel that the company has crossed an unacceptable line.

In the case of Lyst's Canine Collection hoax, there definitely was negative reaction to it. People accused the company of having wasted the time of animal welfare charities who spent a day trying to determine if Lyst was telling the truth. Others noted that Lyst's website links to brands that sell real fur products, which makes its concern with animal care seem somewhat hypocritical. A few people even complained to the UK's Advertising Standards Authority about the hoax.

However, Lyst apparently anticipated that "people will either love or hate the campaign" (in the words of its head of global communications), and decided that it had more to gain than lose by perpetrating the hoax.


Pet-Themed Hoaxes
People love their pets. So making a strange or disturbing claim about pets is likely to attract attention. As a result, over the years there have been quite a few pet-themed hoaxes. Examples include: