I've recently come across two cases in which the press warned the public about epidemics of baldness, only to have those epidemics turn out to be much less than was initially reported.

The first case that caught my attention occurred in 1926, when the New York Times reported that 300 young men in the town of Kittanning, Pa. had been struck by sudden-onset baldness which was attributed to a "mysterious germ":


"physicians at a meeting here announced that they had received more than 300 applications for treatment for premature baldness from men ranging in age from 19 to 30 in the past two weeks.
It was further stated that microscopic examinations had failed to reveal the cause of the ailment, but that it had been definitely established that the disease was not 'barber's itch.'"

The news of this mysterious epidemic was soon picked up by other papers, including the Los Angeles Times.

However, when word of the outbreak reached Kittanning, it was met with incredulity since the reality there was far more mundane. About 12 men in the town had reported that they had recently been losing their hair in patches. Doctors weren't sure what was causing this hair loss, or why it had struck 12 young men simultaneously, but theorized it had something to do with "a disturbance of nerves at the root of the hair."

The news of this mystery hair loss affecting 12 men had been reported in the local paper, Simpson's Daily Leader-Times, and that apparently is how the New York Times learned of it, and then proceeded to improve the story by turning 12 men into 300.

Eager not to become known as the Town of Bald Men, Kittanning issued a press release correcting the misinformation. Town leaders were particularly indignant at the "great influx of hair tonic salesmen which the widely circulated story has brought about. Manufacturers of sure-cure for baldness and hair restorers have descended in hordes." 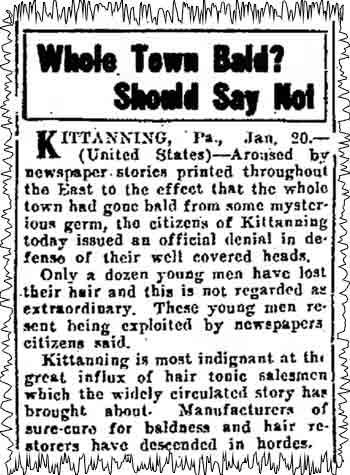 I found the second case of a bogus baldness epidemic while looking for info about the Kittanning story. This case occurred in 1901 when many English-language papers (including, again, the New York Times) reported that people throughout Japan (women as well as men) were experiencing sudden, rapid hair loss. The plague was thought to have spread to the country from Taiwan and could render "a hitherto hairy poll as bare as a billiard ball." 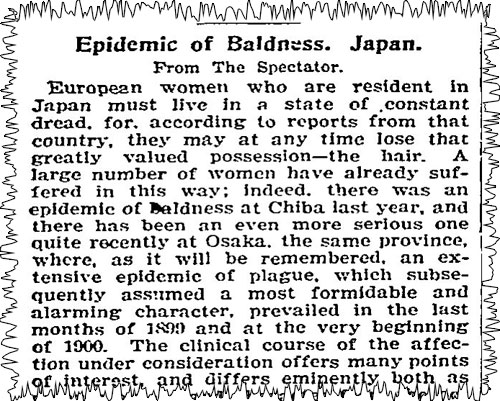 However, when Dr. Stuart Eldridge of the U.S. Marine-Hospital Service sent a letter to Japanese bacteriologist Prof. Shibasaburo Kitasato inquiring about the epidemic, he learned that "both the number affected and the severity of the disease have been greatly exaggerated, and that it may eventually prove that the ordinary cases of alopecia, always rather prevalent in Japan, and neither contagious nor particularly severe, have been magnified by newspaper sensationalism into something new and alarming."

The reality, as summarized by Mike at the Amboceptor blog, is that there had been a "minor urban flare-up of secondary syphilis" in Japan which caused patchy baldness in about 7% of patients. News of these cases then triggered "baldness hysteria" in the media, who blew it up into a full-scale epidemic.

The catalog of quack baldness cures advised by the unidentified "one physician" in the New York Times article about Kittanning is interesting. "Iridiagnosis" is the diagnosis of health problems by studying the irises of a patient's eyes. It's still around, although I don't know of any medical evidence supporting it.
Whatever "apply plenty of elbow grease to the scalp" means (massage your scalp?), it doesn't sound like something that would remedy hair loss.
I assume that "barber's itch" must have been ringworm or head lice or some other scalp disease that could be spread by unsterilized barber's implements.

The advice not to wear tight hats reminds me of my mother. When I was a kid, Mom used to tell me not to wear a hat (tight or not), because it would make me go bald. I asked her why she believed this, and she said that her grandfather had been bald, and used to tell her it was because he always wore a hat when he went outdoors. It seems not to have occurred to Mom that he was putting her on, which isn't too surprising if you know my mother. I've always suspected that she had cause and effect reversed: Bald men wear hats because they are bald; they aren't bald because they wear hats.
Posted by Big Gary  on  Wed Aug 05, 2015  at  05:00 AM
This mysterious germ is called testosterone. It is really nasty for hair.
Posted by Russian Skeptic  on  Wed Sep 16, 2015  at  04:33 AM
Commenting is not available in this channel entry.