Beyonce had her baby. Satan is on Earth.

On Jan. 11, TMZ posted a photo of the sign outside the Beulah Hill Baptist Church, which apparently bore a nice message inspired by the recent birth of Beyonce's baby: "BEYONCE HAD HER BABY. SATAN IS ON EARTH." 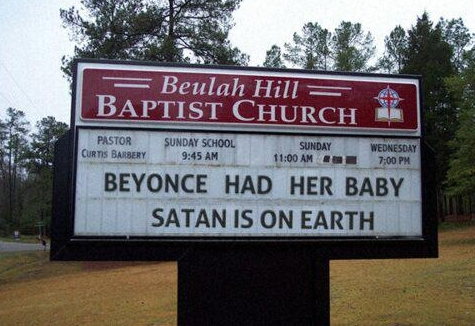 According to TMZ, the pastor at that church told them that vandals had placed the message there, and that it had been taken down promptly.

However, the pastor, Rev. Curtis Barbery, is denying he ever told TMZ this. He gave an interview to the Fayetteville Observer in which he insisted the sign hadn't been vandalized and that the photo was a fake. He said, “It’s never been on our sign because our sign stays locked and the same phrase has been on it since Thanksgiving. Only one man has the key to it.”

But TMZ continues to insist the photo is real (though they won't say how they got it), and that the pastor DID tell them the sign was vandalized.

Most people seem to be inclined to believe the pastor, not TMZ. Mainly because it's so easy to photoshop fake messages onto signs. To illustrate the point, the Atlanta Journal-Constitution posted this photo on their blog: 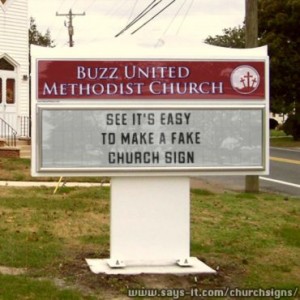 Posted by MadCarlotta  in  Canada  on  Wed Jan 25, 2012  at  08:21 AM
These days, if you want to post a photo of a funny church sign, it's best to do so at a noticable angle, since it's harder for such things to do perspective and suchall.

I'm reminded of course of a few years back, the meme of the afghan/iraqi boy holding a cardboard sign that got changed a lot...
Posted by Robin Bobcat  in  Californian Wierdo  on  Thu Jan 26, 2012  at  12:04 AM
It could've been done with The Gimp. Unlike Photoshop The Gimp is a free download.
Posted by Peter  in  Melbourne, Australia  on  Fri Jan 27, 2012  at  07:32 AM
Commenting is not available in this channel entry.