Singer Beyonce Knowles announced she was pregnant in August. But video of a recent interview with her on an Australian TV show has led to rumors that she's faking her pregnancy, because as she walked out and sat down for the interview her stomach appeared to bend and fold in a weird way. 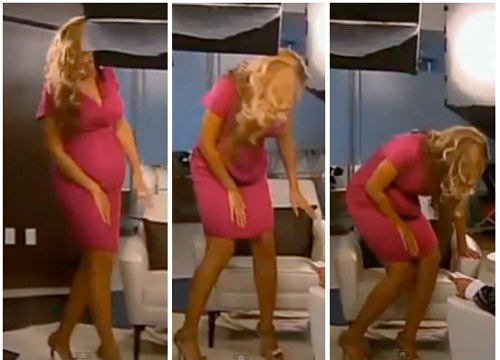 The theory is that she's wearing a prosthetic baby bump, while a surrogate mother carries the actual child. This way, Beyonce will avoid the stretch marks and discomfort of pregnancy — and she'll look fit and toned immediately after "giving birth".

I think the conspiracy theorists are reaching a bit here. And Beyonce, of course, has denied the rumor.

But one question the controversy raises is why do people like to come up with these conspiracy theories about their favorite celebrities? It recalls the Paul Is Dead debate, though the Beyonce theories are nowhere near as elaborate as the Dead Paul theories. At least, not yet. Maybe fans will start finding fake baby clues in Beyonce's albums.

One reason for the theories is that they have some entertainment value. They provide fans with something to discuss about the celebrity. Also, psychologists argue that those who tell such rumors gain status by appearing to be privy to special information. And perhaps, in Beyonce's case, some of her fans don't want her to be pregnant. They prefer the image of her as a youthful "single lady", so they're fantasizing away her pregnancy as a hoax.

I was actually thinking if there is indeed something "fake" about her belly...it's just that she's wearing something to make her bump appear cuter...rounder. I would imagine she is a very fit lady...which means the muscles in her stomach are probably pretty solid...which means she won't "pop" quite as early. Some women also just don't carry "cute". Their bump is irregular...too high, too low. Some pregnancy clothes may not look as nice...or be filled out as well.

Second, I have to agree with Maegan above that an added prosthetic http://www.special-trade.eu/store/baby-bump/pregnancy-tummy.php?gclid=CObjzLXj6qsCFULf4Aod7H6kLw is probably being used since she isn't that far along as can be seen here with her actual pregnant tummy in a bikini. In the earlier months the tummy looks more like weight gain than 'pregnant' which may be why she was wearing a prosthetic so that fans would not start writing or screaming "FAT!".