Beijing residents are not flocking to see virtual sunrises

Well, I fell for this.

A recent article posted on the Daily Mail was headlined, "China starts televising the sunrise on giant TV screens because Beijing is so clouded in smog."

An accompanying photo showed a giant TV screen in a smoggy Tiananmen Square showing a sunrise. 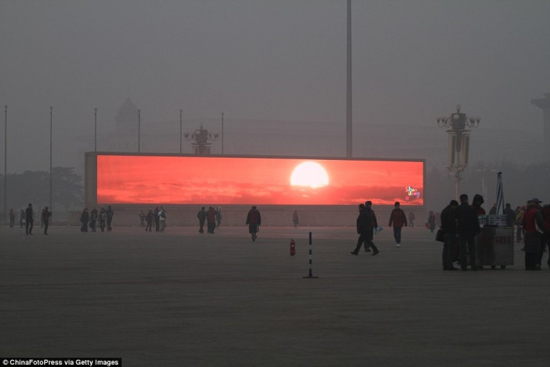 
The smog has become so thick in Beijing that the city’s natural light-starved masses have begun flocking to huge digital commercial television screens across the city to observe virtual sunrises. The futuristic screens installed in the Chinese capital usually advertize tourist destinations, but as the season’s first wave of extremely dangerous smog hit – residents donned air masks and left their homes to watch the only place where the sun would hail over the horizon that morning.

Beijing does, of course, have a horrendous smog problem. This made the Daily Mail article believable. And major media outlets rushed to repeat the claim about Beijing's light-starved masses flocking to see virtual sunrises. And I too repeated the story on the MOH Facebook page. But it turns out the claim was totally fake.

The Daily Mail article has been debunked by the Tech in Asia blog, which writes:


In truth, that sunrise was probably on the screen for less than 10 seconds at a time, as it was part of an ad for tourism in China’s Shandong province. The ad plays every day throughout the day all year round no matter how bad the pollution is. The photographer simply snapped the photo at the moment when the sunrise appeared. Look closely, and you can even see the Shandong tourism logo in the bottom right corner.

This can only serve to strengthen the Daily Mail's reputation for gutter journalism. As my pal Chuck Shepherd says, it's the Greatest Newspaper in the World!