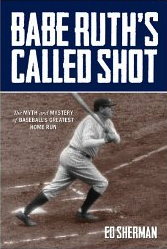 A new book by Ed Sherman examines the question of whether Babe Ruth actually called a shot in the 1932 World Series. It's one of the greatest legends in baseball. But is it actually true? From the book:


These are the facts. On Oct. 1, 1932, the New York Yankees and the Chicago Cubs played Game Three of the World Series at Wrigley Field. In the fifth inning, Ruth at the plate faced the Cubs' Charlie Root, two strikes on him. Ruth, jawing with the Cubs dugout, held out two fingers. Ruth sent the next pitch soaring toward Lake Michigan. The ball whizzed just to the right of what now would be the iconic scoreboard in center field. The "Ruthian" blow, if ever there was one, traveled nearly 500 feet.

No one disputes that he hit one of the most majestic homers in World Series history. But the question is this: Did he call the shot, or was he merely gesturing in response to the Cubs' bench jockeys? It remains one of the greatest debates in sports history, holding us captive as only Ruth can. Sports historians continue to look for clues that might reveal a true answer. From the moment it happened, opinions polarized.
Based on the reviews, it sounds like Sherman never definitively answers the question. But then, for many historical questions, there are no definitive answers.